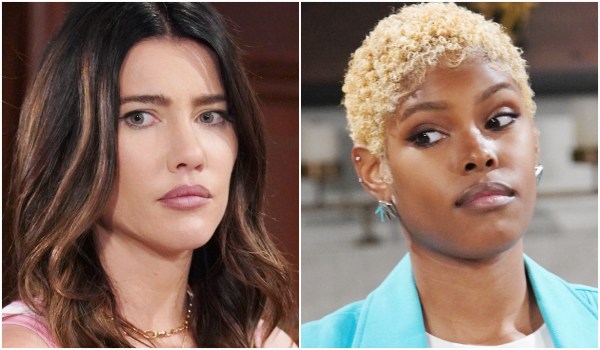 Is the new mom and bride-to-be headed for huge regrets about inviting Zoe’s seemingly sweet sister into her home? The Bold and the Beautiful is rarely subtle when it comes to dropping hints about w…

Paris is all our worse nightmare

I knew that was coming… first impressions hey’

It’s rather soon for Steffy to be loosing another man and if she does I hope like heck it’s not because they want to hook her up with Liam again. Sending her backwards to Liam just doesn’t seem to work in my thoughts, she has advanced while Liam has stood still waiting for someone to pull him in his little red wagon.

If they write a story where Steffy - a strong, powerful woman who’s CEO of a major company - gets outwitted and/or loses her man to a little girl who’s been out of college for, like 10 minutes, I’m going to start throwing heavy objects at my TV.

Agreed! It’s too soon for this kind of trouble and Finn has been all about Steffy from the jump, it’s really hard to believe that he’d even look Paris’s way, especially when he has a Queen like Steffy. That would be ooc and would absolutely ruin Finn for me.

I won’t be surprised if it happens but if it does, that will be the final nail in the coffin for me, I’m out! I would miss Quinn but there’s no way I could stomach Steffy being stomped all over yet again.

Liam has stood still waiting for someone to pull him in his little red wagon.

Agree, and not to mention it’s been reported Finn’s mom may be giving Steffy a bad time. So we have Paris and mom-in-law gunning for Steffy. Yikes

As long as this ends up uniting Sinn and making them stronger as a couple and Lope is not part of this storyline then I’m fine with it.

I’m sick of Steffy propping Lope. I’d prefer a s/l like this where maybe it’s Sinn uniting to figure out what Paris is up too. Rather than a Steffy Liam Ivy situation where Liam sides with Ivy against Steffy blaming Steffy for everything.

It’d be a welcome change if Finn would actually be on Steffy’s side support Steffy believe Steffy.

This would be a shame for Finn’s mother to be a nightmare. It’s not realistic. Steffy comes from a billionaire family and is Co-CEO of her family business. ??? Steffy would be a catch for any man.

As far as Paris goes… her character has been ruined for me. I really liked her when she came on the show, but I now see her as a younger know it all version of Brooke Logan. Paris is boss and has all the answers. Not fun to watch.

Well, this is all Steffy’s fault - who in their right mind would invite this girl, that they hardly know, into their home??? Just stupid. I know it’s a story, but come on. A new baby, new husband to be, yet you have this young girl staying with you?

I think that Paris will start to put opioids in Steffy’s drinks…maybe a small amount at first, but then she will be full on addicted again. When they send Steffy as a hot mess back to rehab, that’s when Paris will really make herself invaluable to Finn, and of course she will end up drugging and sleeping with him too. And probably pregnant.

Hadn’t thought of that angle, but that would be awful. I was figuring more Paris would try and steal Finn.

If they went and made Paris a straight-up villain, I think I’d be OK with that. I can buy her secretly drugging Steffy a lot more easily than I can accept her Single-White-Female-ing Steffy and Steffy allowing it to happen and Finn getting suckered by it, too.

I have always said if you leave a show because one of your favorites leaves then that is disrespectful to the remaining actors/actresses because it’s like saying they don’t have enough talent to keep you interested, but in this case, I absolutely can see one person making people want to leave and getting sick of one character being used as a prop for a character people dislike so greatly.

I grew sick of how they treated JMW a long time ago (part, but only partially, in part to having her two children and taking maternity leave), then Quinn practically disappeared while John M. had hip issues instead of them hiring a standby. The day they just HAD to make Flo a Logan just so it could be all about Brooke was the last straw for me, or close to it. My final absurd storyline was the horrible, almost comical, way they betrayed such an intense subject as Suicide.

I’ve only watched once or twice a week since that storyline, it was almost like a fan suggested that subject so the writers could insert helpful information that show all the steps to such a serious and growing epidemic. Then the writers just turned around and made fun of that fan by doing a horrible and comical version of it. JUST AN EXAMPLE

That’s the only way I look at it. Her character being tortured brings out her best work. She brings it every time no matter what is thrown at her.

She needs all the support she can get. Both Thomas and Ridge are all about Logans which they think about her every so often.

Ordinary I never leave a show because of one character but at this point, Steffy is the only reason I still watch so if she gets screwed over again then I will stop watching because the only aspect of the show I still enjoy would be gone. I mean if I don’t enjoy a show then I’m not gonna watch it lol even with Steffy, it’s barely hanging on by a thread tbh.

Steffy and Paris are my worst nightmare. So much potential for a fun hand that rocks the cradle storyline , but it has been ruined. They are annoying.