Alan and Jonathan have another confrontation and the baby has complications. Vanessa gets more involved in Dinah and Mallet's lives. Harley and Gus go searching for his secret.

Alan is telling Beth that they have to get things ready for Lizzie coming home. Beth's dismayed to hear that Alan hasn't changed his mind. She thought that Josh's little Thanksgiving speech might have changed things, but apparently not. Vanessa comes by to give a gift for the baby and asks how things are. Alan says that Jonathan is still the dad, but 'nature has a way of correcting her mistakes.'

Lizzie wakes up to find Jonathan has been watching her and the baby sleeping. She teases him for getting misty-eyed and tells him that 'everything was complicated before; now it feels like it's just the three of us.' She gets up to go into the bathroom and Jonathan holds the baby. While he looks down at her, Tammy comes in with a gift. He says that he can't believe anyone would be crazy enough to let him have a kid. The baby starts crying and Tammy offers to change her. When she takes it in her arms, Lizzie returns and thanks Tammy for all her help. Tammy gets uncomfortable and gives the baby back before excusing herself. Worried looks all around.

Tammy returns home and, finding that she is alone, puts her and Jonathan's song on and starts crying on the couch. Marina comes to visit and finds her crying. Tammy feels better now and Marina encourages her again to move on. Soon, Remy arrives and asks Tammy if she saw the baby. Marina changes the subject and suggests that they all go out. When they get to the square, Marina announces that she's leaving them alone. Remy offers to get her some coffee and she sits down to wait. Jonathan walks by and won't even look at her.

Lillian is teaching Lizzie how to breastfeed while Jonathan stands in the corner giggling. Lizzie starts to worry that the baby is too warm, but Lillian says that she's fine. Alan and Beth arrive and Alan asks to hold the baby. When he takes her in his arms, Jonathan says that he hopes the diaper leaks on him. Alan begins telling the baby that she has nothing to worry about: She's a Spaulding. Lillian takes the baby down to the nursery and Lizzie asks to talk to her mother alone. She excitedly talks about all the wonders of being a new mother before her mother asks her when she's coming home. Lizzie tells her that her home is with Jonathan now and she needs help convincing Alan of that.

Alan and Jonathan have gone out to the corridor. Alan hands Jonathan a set of court papers; he wants custody of the baby ('Penelope' he calls her) and, if Jonathan lets him have it, he will get what he really wants: Tammy. He even suggests that Jonathan set up the birth in the crashed car with Tammy as wet nurse. Soon, they begin shouting at each other until Lizzie comes out and Jonathan hands her the custody papers. She's upset, Beth's upset and Jonathan states that none of this is good for Lizzie or the baby so 'someone has to give up something and that means me.' Lizzie is convinced that he's about to abandon her but he tells her to calm down; they're going to move in with Alan. Beth says that's quite a concession and Alan grudgingly shakes Jonathan's hand before Beth takes him away. Lizzie tells Jonathan he's out of his mind. He takes her back to bed and Lillian returns to tell them that the baby has a heart murmur. When they begin to panic, she suggests that they take her to a specialist in Chicago. She goes off to set it up and Jonathan says that they aren't going to Chicago or to live in Alan's 'mausoleum'; he won't take the baby anywhere Alan can gets his hands on her.

When Alan and Beth get home, he tells her that Jonathan coming to live with them will only be temporary. 'This baby is what our relationship needs. It's our future.' Lillian calls and tells Beth that the baby has a murmur. Alan grabs the phone away and is worried to hear that they're heading off to Chicago. Meanwhile, Jonathan and Lizzie sneak out of the hospital with the baby right behind Lillian's back.

Ashlee walks in on Dinah and Mallet while they're still wrestling around in bed. Ashlee tells them that Vanessa hired her to work on Mallet's show so, now, he's her boss. She offers them donuts and bran muffins and starts to ramble about Mallet's upcoming calendar and fan club. Dinah is not amused and tries to get rid of Ashlee. Mallet runs off to the bathroom to get dressed and Ashlee gets in bed next to Dinah and continues to go on. Dinah calls Vanessa for a meeting. Ashlee tags along and says that she needs to take notes even though she doesn't have a pen. Dinah finally gets rid of her and wonders why her mother hired her. Dinah doesn't want Mallet to have a calendar or a fan club; he hates it, she insists, and doesn't want to be a star. Vanessa suggests that it is Dinah who wants to be a star and she's right: Dinah wants her own show. Vanessa wonders if Mallet would have an objection to this.

Harley wakes up to find Gus staring out the window. He's flicking his fingers about in an agitated way, still worried about what Blake might have had on him. Neither of them have any idea what it could be. They decide they better go to Blake's room to search for what she has. They search the room and go through her trash but can't find anything. Mallet comes by the room expecting intruders but finds them sprawled out on the floor in garbage. He starts to tease them for breaking and entering and asks Gus what his secret is; is he really a woman or a ghost? Harley starts to imagine some scenarios as well: Gus as a sugar daddy to young women, Gus as father to mysterious children, Gus as a priest. But Gus still insists there's nothing and becomes more flustered by all the suggestions. Finally, Harley finds a CD with 'GA' printed on it. They put it in, expecting something related to Gus, but they find picture of a young woman instead. Gus confesses that he has no idea who she is and continues searching around even more eagerly.

Dinah returns to Mallet's room where he's been hiding from Ashlee. She tells him that she solved his problem; now she has her own show to replace his. Hugging him aggressively she asks: 'Isn't it great?' But Mallet isn't so convinced; he would have liked to have been asked before she got him fired. Vanessa arrives and tells him that he's not been fired. But they can't afford to do both shows so they will air an episode of each and let the viewers vote on which show they want.

Next on GL:Jeffrey goes to see Ditkins for work. Alan realizes that Jonathan and Lizzie have run off. Marah continues her plan to reunite her parents. 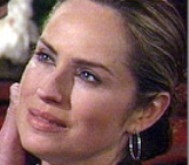