An accident at the Spaulding lab releases an experimental drug that erases everyone's memories.

'Some people say our memories are what make us what we are...' Coop narrates as we see glimpses of Cassie looking through her mementos of Tammy. As he continues, he says that some memories are so painful that you wish you could get away from them. What if there was a pill that would let you eliminate the memories and change who you are? As he stops, it becomes clear that this is a story that he's written. Ava tells Coop that this is the best thing he's ever written. She's already sent it to Alan and to Spaulding Publishing. They've bought the book and it will make him famous. Coop is startled to hear this; it wasn't what he was expecting. When they go to Alan's offices, they're shocked to find proof that Alan isn't interested in Coop's book, just in his idea about wiping away people's memories.

Alan is on the phone with the leader of his labs. He is sure that when this drug is fully developed, it will make them millions. Everyone has something in their lives that they want to forget. Lizzie overhears this and then turns and walks outside. In the park, she runs into Cassie. Although both are obviously still grieving, Lizzie asks Cassie if she would accept a way to get rid of the painful memories if it was available. Cassie admits that she can't carry this pain with her forever, not for RJ or Josh. Lizzie thinks she may have found a way out of their grief. Meanwhile, Alan is annoyed to see that his usual driver has been replaced by Cyrus. He expects that Alexandra has sent him to spy on his daily activities. Undeterred, he gets in the car anyway. They drive up on Beth and Alan throws her in the car. He offers her a way to get rid of everything bad in her mind. Beth starts to panic as Alan drags her into the lab. Coop surprises them in the elevator and demands to know what Alan is up to.

Lizzie and Cassie make their way to the labs and find Remy working security there. When he discovers that he has been working for Alan, he decides to quit and suggests that Cassie come with him. She isn't going anywhere. As Lizzie tries to break through the lab door, Remy stops her. As soon as his back is turned, they begin smashing the door down. When that doesn't work, Lizzie runs after Remy, finding him in the men's room and grabbing the keys from him while he's using the urinal. She throws the keys to Cassie who walks into the lab. As she searches around, Cyrus and Ava walk in and surprise her. A chemical is released into the air and flows through the vents. Soon, everyone in the building has collapsed. As they wake up, none of them remember who they are. Cyrus seems happy to wake up with two women on top of him though.

Lizzie is disgusted to wake up in the men's room on top of Remy with his pants down. After some confusion, they conclude that they must be a couple, and a good looking one at that. He begins pushing her around the halls in a chair while they talk about what their relationship must be like. They both have an ache in their hearts so they must be in love. When she asks him to get her a soda, they start to argue. He feels insulted that she wants him to do this and thinks she's intimating that he has no money. After she wanders around glumly and he paces around the men's room, she returns and they start to make love on the sink counter... until they remember who they are and leap up and get dressed.

In the elevator, Alan reads his driver's license but it isn't familiar to him. They start calling Coop 'Hank' and Beth starts to imagine that Alan must be her father. She also sees that she is pregnant and, since Coop has a book about children in his hands, he assumes that he is the father. Alan doesn't think that Coop can be a very good catch. The only thing in his wallet is a library card and he isn't even wearing a wedding ring while Beth is. Although Alan doesn't know who Beth's mother is, he's sure that she wouldn't approve of this. Coop tells 'dad' that the baby will need all of them. As Alan walks away, Coop takes Beth's hand and they go outside to shop and pick flowers. As he feels her belly and leans in for a kiss, their memories come back and he leaps away, shocked. As Alan wanders around the building, the lab tech finds him and tells him that the drug leaked out in its gas form. It should wear off soon. Coop and Beth return, embarrassed, and Alan takes her off to find Lizzie. 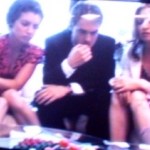 Ava, Cyrus and Cassandra debate whose name is more interesting and who really woke up in his arms. The ladies start to fight over him, but he assures them that there's plenty to go around. The women start competitively flirting with him. He suggests that they search around the building for other people. He starts down the hallway and Ava follows him. She tells him that she keeps getting flashes of them together. As they giggle and get close, Cassie screams. Cyrus runs down the hall to her. She slams the door behind him and starts tearing his clothes off. Ava soon catches them on the couch after finding a picture of Josh in Cassie's bag. The two ladies starts to fight ferociously while Cyrus laughs. Suddenly, they start to remember who they are. They all feel embarrassed, except for Cyrus, who doesn't seem bothered. Cassie leaves and tracks Josh down, sitting in his lap and giving him a hug. Ava goes off and finds Coop. He no longer wants his book published. Memories, good and bad, are what make up life he concludes.

Next on GL;
Olivia and Doris put the case together against Reva.

Reva is getting nervous about Olivia's obsession.

Marina tries to meet with Cyrus as his wedding approaches.

Thank-you for your comments and feedback! We do ask that our visitors abide by the Soaps.com Guidelines. Please feel free to CONTACT US if a moderator is required to handle any bad posts. Above all, have a great time posting!

The Life You Always Wanted