Wedding of the Year

In his room at Cedars, Alan-Michael wakes. After looking around, he picks up the paper by the bed. Seeing an article about Alans wedding, he gives a disgusted groan. Outside, Coop starts asking Ava if Alan-Michael has woken up yet. Frank arrives and tells his little brother that he really should not be there. Coop reminds him that Alan-Michael hates him even more. Frank thinks that Coop is pushing Ava into another mans arms. Ava tells them that Alan-Michael is awake and they file in to see him. Alan-Michael tells Frank that it was just an accident and no ones fault. The Coopers leave. Ava thanks him and he says that he has a wedding to go to. After the doctor visits him however, he realizes that he wont be going to the wedding. While the doctor hasnt said anything for certain, it is clear that he has no feeling in his legs and cant move them. Ava tells him that if there is anything that she can do, she will and promises to be there with him. Coop watches them all along. Later, after leaving Alan-Michael alone, Ava returns to find the bed empty.

Remy applies for a security job under a false name. This is his ticket into the wedding. Soon, he is in uniform and drifting in the background of the wedding.

A flustered Doris rushes around her room trying to get ready when Beth walks in. Shes looking for an invitation; she already bought a black dress for the occasion. She insists that she merely wants to pass the baton. After making some disparaging remarks about Doris dress, she explains that she isnt jealous at all shes had more than twenty years with the family and shes happy to share the misery. Doris gives in and hands her an invitation. Beth carefully scans it to make sure it wont be a cash bar and then walks out. Doris tells herself that she will be the best wife that Alan could have. Meanwhile, in the hall, Beth meets with Rick. He tells her that she needs a date and a spanking to keep her in line. They walk off together arm in arm.

Lizzie has put on the worlds ugliest brides maid dress (words to describe it fail me). Ashlee picked the dresses out herself. Lizzie starts drinking, but Ashlee wont partake; she doesnt want to dull the experience that will be the wedding of the year. This statement is so dumb that Lizzie cant even roll her eyes. She points out to her soon-to-be aunt how wack this is and how none of it is real. This seems to be news to Ashlee who believes that her mother genuinely loves Alan. Shes disappointed to see that Lizzie thinks everyone only cares about money and power. Lizzie tells her flatly that this wont last and Ashlee is too old to be this naive. Im just happy, Ashlee perkily says. Six weeks in this house and youll be as heartless as the rest of us, Lizzie says with deadly assuredness.

Cassie promises Tammy that she will remind Alan of the life he took. Josh catches her talking to no one and looking at the newspaper clipping about Alans wedding. She says that its just a recipe and she needs to run off and get some groceries. He suggests that they have a night out and go to Chicago to get away from it all. She wont go. He realizes that this is all about Alans wedding, although she insists that it isnt. Now, she just wants to go shopping and tells him to stay there while shes gone.

Alexandra tours Towers with Alan to inspect the wedding decor. After some casual remarks about how genuinely repulsive Doris decorating sense is, she reminds her brother that Doris is a blackmailer and a sleaze. For Alan though, being free counts for a great deal more. Alexandra pulls him long to see Alan-Michael. They dont make it to the hospital. Instead, each member of the family finds the time to sneak away for a few drinks alone while Doris and Ashlee put on the finishing touches and apply their blush.

At the ceremony, Alan is surprised to find that Lillian has come. She tells him that hes a monster and walks away. Beth and Rick arrive next. Rick tells Alan that Beth has great taste. Alan says that hes already moved on. And down, Beth quips. They move away as Doris and Ashlee arrive. He compliments her on her unique dress and she demands to be presented to the crowd. After the presentation, the ceremony commences. A slightly drunk Lizzie mopes down the aisle followed by a beaming Ashlee and the blushing bride herself. Rick has to stop Beth from trying to trip her as she walks down the aisle. Ashlee sings a song while everyone looks on in utter dread. Lillian and Alex can barely stifle their laughter and have to look away. As the service begins, the elevator opens and Cassie walks in. You killed my daughter and you dont deserve to live! she shouts as she reaches into her bag. Alan is startled as Rick grabs Cassie and tries to hold her still. Josh runs in calling her name. She pulls out a portrait of Tammy and pushes it in Alans face. She needs everyone to know what a monster he is; she wont let him walks away from this. Josh puts his arms around her and promises her that everything will be alright. He takes her to the elevator and continues holding onto her tightly. When they get outside, he tells her that she shouldnt sneak out like this. He is going to take her home and make sure that she gets some sleep. They have her pills to help her now. He hugs her and says that he loves her before going off to get the car. She turns around and sees Tammys ghost. The ghost tells her that she cant sleep until shes finished what they wanted to do.

After the commotion, Doris turns to Alan and tells him that they need to get on with it. He cant believe that shes being serious. She says that shell talk to the manager about letting a crazy woman in after they get back from their honeymoon. Shes gone too far to turn back now. He thinks that they should call the service off and just hold a private ceremony alone. She tells him that, if youre getting cold feet, think of prison. Watching the bride and groom, Lillian tells Alexandra that this is disgusting and they start taking swigs of their flasks. Alex gets up and asks her brother if hes lost his mind. Nonetheless, the service resumes. Doris gives her vows, which she wrote herself, and detail how she admires Alan, what a decent man he is, how much he loves his family and will be a wonderful father to her child. When Alans turn comes, he awkwardly mumbles that hes not very good at this, even though hes had lots of practice. He gives some arbitrary promises and trails off before the minister asks him if thats it. Oh yes, Alan remembers and continues straight-faced, Ill be very happy....whats next? The rings come next and they are pronounced man and wife. Doris pulls him into an over-enthusiastic kiss and they walk down the aisle.

Beth is appalled to see that Alan is getting away with it. So are you, Rick tells her. But Beth is feeling like a victim again and no one can make her feel that way. She walks away, telling him not to wait for her. Lillian and Lizzie walk by and stare at the cake. Lillian is now sure that Alan is pure evil. Lizzie wonders what the reporters will write about this; will everyone hate her for being part of this so soon after her baby died? Meanwhile, Ashlee hunts down Alexandra, who has snuck out to the balcony. Ashlee wants her advice because she always seems to know what to say and do. She is just so excited to be part of a family that lives together and has their own company. Arent you enthusiastic dear, Alexandra remarks, with a sarcasm utterly lost on the newest Spaulding. Ashlee takes out the business cards she had made that have Ashlee Spaulding emblazoned on them.

Alan tells Doris that hes never met anyone as ruthless as her. She takes that as a compliment. He sneaks out for some air and a cigar. Remy closes watches him go. Alone, Alan smokes and tells himself that hes done it again. Sometimes you even surprise yourself. Meanwhile, inside, Ashlee is getting frustrated that no one is dancing. Her mother tells her that none of that matters. This was all worth it just to see how happy it is making her. Now, she can throw the bouquet. When she throws it, it hits Beth in the head. Doris then awkwardly makes a toast to the absent Alan. He walks back into the room as she finishes and collapses on the floor in front of her, covered in blood.

Next on GL:
Alans been shot and Doris worries about whether the wedding will be official. 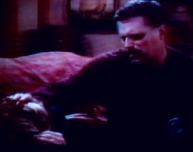