Jonathan reluctantly attends the funeral, Josh helps Cassie though it, Alan continues to fight and things come to a destructive end.

Jonathan holds Sarah and kisses a picture of Tammy in her wedding dress. Reva arrives, trying to put on a brave face. Billy soon arrives behind her to take them to the funeral. Jonathan refuses to go and listen to meaningless words with a lot of people who barely knew her; he cant goodbye in a room full of people. He and Sarah will says goodbye in their own way. Reva gives him the heart necklace that Tammy used to wear and walks away. He breaks down and picks up the necklace. Holding it in his hand, he kisses it while he wonders if she will hear anything at the funeral, or hear anything that he can say.

Cassie and Josh finish packing up Tammys things. RJ comes down to them to watch and then they go to the church. When they arrive, RJ begins staring at a picture of an angel on the wall. He remembers Josh taking him to his fathers grave and telling him that he could still talk to him anytime; this is how he wants to think of his sister now. Reva and Billy arrive soon after. She goes to her sister who stands by the coffin covered in flowers. She tells her that this isnt fair; her funeral was supposed to be next, not Tammys. Cassie tells her not to say that, it wouldnt have been any easier; shes never needed her more than she does right now.

Marina and Remy are badgering Frank about going after Gillespie. He tells them that, if they really want to honor Tammy, they shouldnt be beating people senseless and demands that they back off. Remy still feels like he has to do something though.

Beth is disturbed to find that Alan and Lizzie are so insistent about going to the funeral. Particularly with all the rumors out there about their involvement. Lizzie is says that they need to go and represent who they are. Beth shudders to hear her daughter sound just like Alan. Theyre both delusional if they think this a good idea.

Daisy doesnt want to go to the funeral, but Gus says that she owes, at least this, to her cousin. Harley arrives, talking about how she hasnt been able to get anything on Gillespie. When they arrive at the church, Daisy rushes to her grandmother. Harley never realized how much she missed her daughter before. She begins talking about how she will make Alan pay for what hes done when Frank interrupts her. Hes already had to defuse Remy and he doesnt want to have to do this to them as well. They move away and Rick asks Frank if Alan knows that hes a suspect. Frank tells him that they have nothing on Alan.

Jeffrey arrives to give his condolences and remember the time that he had with Tammy when he and Cassie were together. As the other mourners file in, the sombre mood is ruptured by the arrival of the Spauldings. Alan claims that he is only there to pay his respects. Harley asks him to turn himself in if he really means that. He walks right up to Cassie and offer his condolences. Josh tells him to leave, but Cassie stops him. This is Tammys day and she only wants it to be about her; besides, this is Gods house and everyone is welcome. Reva says that hes lucky it isnt her house or shed kick him out.

Suddenly, everyone turns to see Jonathan and Sarah arrive. People line up to pay their respects to him and he can only nod while all the cops promise to get him justice. Remy stays across the room, so Jonathan walks straight over to him. He knows that Remy blames him for this. Remy says that there is enough blame to go around and it wont make things right or bring her back. They shake hands. Lizzie comes over to see Sarah, but Jonathan turns his back on her and hands the baby to his mother. He and Cassie embrace and she apologizes for doubting how much he loved her daughter. He thanks her for her doubts; they needed that to prove their love was worth fighting for.

As the service begins, Cassie stands to say a few words, but is incapable of speaking. She sits down and Josh slowly gets up to try and say what she would, if she could, about our family. They are grateful that everyone has come to share in their grief with them. He tells them the story of the lighthouse, how it shines with the souls of all the people of the town. Tonight, Tammys soul will shine and light up the night.

After he finishes, Father Ray is ready to start the prayers, but Jonathan gets up to speak. He stares at Alan and says that there is more to say. He never went to church growing up; not that he didnt believe in anything, because he does. He believes in good and evil, but sometimes its hard to tell who is who. He crouches down and tells Sarah about Tammy, about how much soul she had and how she taught him what it is to love someone. Now, they will never see her again, or hear her contagious laughter...he was married in this room only a few days ago and wishes that things could have gone slower. Now, the only thing thats left of his wife is in a box and all the love that he feels for her is mixed with hate. He promises that he will take care of our daughter because she would have been his daughter with Tammy, if theyd had the time. Staring down, he finally asks her to wait for him; he will find her, no matter what.

The mourners file by, dropping a flower on the coffin as they pass, before it is raised and taken out. Cassie sits still, staring at a poem she wanted to read, but couldnt. Buzz offers to read it for her as the ceremony closes. As everyone leaves, Jonathan tells his mother that hes not ready to let go and stays in the church. He leaves the baby with her as he wanders off. Alan returns and tells Reva that the baby is not a Shayne, shes a Spaulding and he wants to sort things out right now. Reva cant believe how delusional hes being, but Alan is unfazed. He still asserts that hes done nothing wrong; all of this misery is Jonathans fault. Overhearing this, Jonathan grabs Alan and throws him into a pew. Holding Alans hands up, he says that Tammys blood is all over them. Alan pushes him off as Jonathan screams that Tammy did not deserve to die. Alan agrees: You did and then tells him to drop the grieving widow act. Hell forget Tammy as soon as another pretty girl comes along. Jonathan lunges at him, but Billy holds him back. Alan promises that this will not be over until he has Sarah. Reva tells him to get out while he can still walk.

Once Alan leaves, Jonathan asks to be left alone with Sarah. Before they leave, he tells his mother how much he loves her and asks Billy to look after her. He goes out to his car to wait. When Alan arrives, putting out his cigar and climbing into his limo, Jonathan starts to follow him. He kisses Tammys necklace and hangs it in the window as he drives, remembering Alans words to him: You wanna be a killer? Its in you. As they speed along, the driver tells Alan that they have a situation. Turning to look out the window, Alan realizes its Jonathan and tells his driver to lose him. They drive through the countryside until the limo manages to swerve away from him. Jonathan goes off the road and over a cliff. The car plummets and explodes on impact. Reva arrives at the summit and screams out.

RJ, Josh and Cassie return home to see that everyone is waiting for them. Josh is surprised to see that Reva isnt there, but Billy tells him that she was very worried about Jonathan. Josh imagines that Reva can take care of herself now. Meanwhile, Olivia calls Ava and leaves a voice mail message asking her if shed like to get together. She turns to see that Jeffrey is also leaving a message asking to talk to her.

Beth and Lizzie have returned home to dinner. Beths worried that Alan hasnt returned home yet. Lizzie hopes that he never will. Her mother tells her that she should be grateful that her family is together. But Lizzie isnt grateful, this family is a curse; theyre crazy, selfish and mean. She hates the hole in the heart that she cant fix. If this is what it means to be apparent, I wish the baby had never been born.

Next on GL:
Frank tells them that no bodies were found after the fire.
Reva has two more funerals to plan. 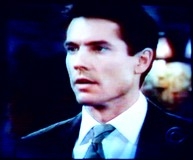