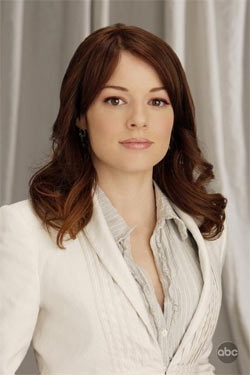 Actress Aubrey Dollar is best known for portraying Marina Cooper (from 2001-2004) back in the golden time before she became Springfield’s number two police woman (her aunt Harley would be number one). Now the young actress is returning to television screens but, unlike her former character, she will not be playing a cop with boy problems this time around but an intrepid crime reporter…with boy problems. Dollar has taken on the role of Cindy Thomas in the new ABC drama called Women’s Murder Club. The show is based on the best-selling series of novels by James Patterson and follows the lives of four women in San Francisco as they pool their talents (as reporters, cops and lawyers) to solve cases. The series co-stars Angie Harmon, Paula Newsome and Laura Harris. It will premiere on Friday nights this fall. Since leaving the cast of GL, Dollar has been busy appearing both on stage and in the films Failure to Launch, Backseat, Save the Last Dance 2 and Prime.

* For a few months, we had the chance to see up and coming actor Tim Peper as lawyer Jimmy Donovan, stepping in for Doris as she pursued her vendettas against some of the prominent residents of Springfield. After playing the singularly sleazy and ambitious DA's assistant, Peper has gone on to a new and very different role. The Nyack, New York native has landed a part in the new ABC sitcom Carpoolers. Created by Saturday Night Live and Kids in the Hall veteran Bruce McCulloch, the new show focuses on the everyday lives of four suburban men as they commute to and form work. The innovative one camera show also features actors Jerry O'Connell, Jerry Minor and Fred Goss. It is scheduled to premiere on Tuesday, October the 2nd 2007 at 8:30 PM on ABC.

* Here at Soaps.com, we often get letters from people who are curious to know what has happened to one of their favorite performers after they've left the fabric of their show. Sometimes it's easier to find out than others. Since leaving the cast of GL nearly twenty years ago, Kristi Ferrell has never been forgotten by fans for her raucous portrayal of the most unbalanced Shayne sister, Roxie. Mary C. recently wrote to us and asked about the always popular Roxie. Unfortunately, Ferrell has been leading a very low key life lately and little information is publicly available about her. The actress, born in Lewisville, Texas, worked as a Dallas Cowboys cheerleader for the 1978-1979 season before moving into acting. After small roles on such classic 80's shows as CHiPs and Dallas, she landed the role of Roxanne 'Roxie' Shayne Corday in 1984, playing it with great aplomb until 1988. Once she left the show, she traveled to Europe where she performed in theaters in Oxford and Rome before spending some time in galloping across the beautiful landscapes of Scandinavia. She then returned to California where she made the films Suspension of Disbelief (1993), Seven Days to Kill (1994) and the television pilot Len & Lys (1997). At that time, she also got back together with a former high school love and spent several relatively quiet years living in the country where she worked on her writing. Although she was approached by GL to make a brief return in 2002, she turned them down.

In other news, former Lizzie Spaulding (2003-2006) Crystal Hunt has shot a new comedy entitled Sydney White. The film stars Amanda Bynes, co-star of current hit Hairspray (also laden with GL alumni, see article), in the story of a tomboy and her outcast friends as they do battle with the in-crowd at college. The film is set to open on September the 21st. In even more fascinating news, Ms Hunt has recently launched her very own fashion label... for pets. Yes, Roxy Hunt Couture, named for Crystal's adorable little dog Roxy (which just happens to be the name of Lizzie Spaulding's dog and Reva's sister) came out recently with layouts in Modern Dog Magazine and other dog fashion rags. For anyone interested in dolling their dogs up in some stunning designer duds, please visit this link to the official site or ask for information at your local pet boutique.