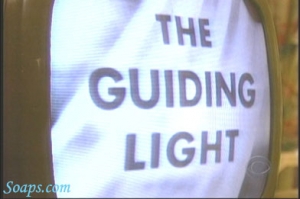 GL’s Light Spreads to England
The powers that be have just inked a deal with media company Power that will send GL across the great divide and beam the Guiding Light onto the shores of England. While many other soaps have been enjoying play on televisions around the world, P&G’s soaps (GL and ATWT) have stuck mostly stateside. This may be a golden opportunity for them to reach out to a whole new audience and build a new fanbase.

In announcing the new deal, the CEO of Power, Justin Bodle, could hardly contain his enthusiasm. ‘This is the first time that global audiences will be able to enjoy the trials and the tribulations of two of the biggest U.S. daytime dramas in the history of TV,’ he said. While there has been a booming soaps industry in Britain for decades, this is sure to bring an added ingredient to its rich palette. ‘Daytime drama remains a truly dynamic genre,’ Bodle went on to say, ‘which continues to command significant audiences on the international screen across all dayparts with their feisty story lines and plots. Power is delighted to have acquired the rights to two original masters of the genre, which together represent a modern day slice of American TV at its best.’

GL Star Walks for the AFSP

Did What If...?'s Killmonger Slay? What Was B99's Best Callback? Who Enjoyed Better Supersex? And More TV Qs!