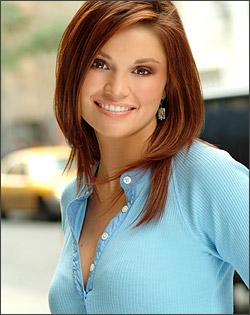 Mandy Bruno is a very busy actress these days. GL‘s Marina Cooper is set to join the Broadway cast of the long-running musical Les Miserables on April 24th. Mandy told reporters that ‘I have to keep pinching myself because I can’t believe it’s really happening. The theater is what I love, and this is what I’ve always wanted to do. It’s amazing, and I feel so blessed.’ But just because she is an Emmy nominated television actress doesn’t mean that getting the part was a cake walk. She still had to go through the arduous process of Broadway auditions and an interview with the co-creator of the mega-musical.

Although Bruno has, even at 25 years of age, racked up considerable experience in musical theater, this is her first Broadway gig. It has been a dream for hers since she was six years old. Les Miz was the first Broadway show that she ever saw and may have been the deciding factor in the direction she would take in her life. She grew up singing songs from the show and always desired to play the part of Epinone herself one day. She took on the role of Marina Cooper in 2004 at the same time that she graduated with a Bachelor of Fine Arts from Otterbein College in Westerville, Ohio. With her extensive training in dance, voice and acting she has appeared to the delight of theater audiences in productions in and around the Columbus area over the past several years. Juggling a demanding Broadway stint and her role on GL will be very demanding for her, but we’re sure that she’s up for it. Soaps.com congratulates Mandy!

Where Are They Now: The Michelles