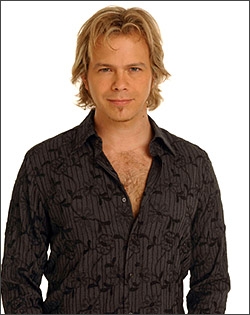 With the passing of Tammy and Jonathan�s dramatic departure, GL now leaves the canvas open for a new direction among the younger set of Springfield. As we reported earlier, it has been officially announced that the character of Dylan Shayne Lewis will be returning to screens in March.

Viewers will be lucky to get two treats at once: A new actor and the return of an old character. The role of Dylan was originated by Morgan England. On this return however, the part has been recast with soap veteran Brian Gaskill. He is best known for his roles on AMC and ATWT. Sources say that this recast is not because of any ill feeling with Englund, but because they want to bring the character in a fresh new direction. With the younger Gaskill and the character�s volatile past, writers are expected to try and recapture some of what will be lost with Jonathan�s absence. Besides offering some much needed support for the grieving Reva, he is also expected to bring problems to Gus and Harley, much as he did for her when she was with Alan-Michael. Rumors of Mindy Lewis� return have also been circulating recently, perhaps signalling a shift in the show back to the Lewis family.

For those who don�t recall, Dylan is the illegitimate offspring of a young Reva and Billy. He ran around with Harley as a young man before leaving her pregnant while he was sent to jail for bank robbery. She never told him about the pregnancy and gave the child (Susan/Daisy) away for adoption before moving on with Alan-Michael. When he was released from prison, he and Harley tracked Daisy down but decided that she was better off with her adoptive parents. While his reappearance complicated Harley�s failing marriage with Alan-Michael, he left her side to be with his under-aged lover Samantha Marler. A mentally unbalanced Reva helped them elope before almost killing them when she drove off a bridge. While he mourned his mother�s supposed death, he tried to move on with a paralysed Samantha, but she pushed him away. He then went through a string of women and shady business deals before being blinded in a car accident. His sight returned over time and he married Bridget Reardon and moved away. The character has only appeared sporadically in the last decade snd his return is expected to have surprising results.

GL Goes to the Gulf Coast