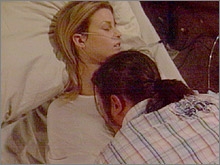 We�ve been flooded with questions about the exit of Tom Pelphrey (Jonathan Randall) and Stephanie Gatschet (Tammy Winslow Randall) this week so, just to clarify for everyone: They are departing from the cast. This was first announced and reported here in September after several months of speculation. Originally the pair were supposed to exit by the end of December or early January. However, thanks to some convincing from the writers and producers, they agreed to stay a little longer to finish the storyline without a rush.

Both of the wonderful young actors decided to leave of their own accord with the desire to move on to other projects. Their final air dates have not been officially given by the network as a means of safeguarding the dramatic effect of their exiting. While the character of Tammy did die this week, we can expect to see Gatschet reappear in upcoming episodes in the dreams and thoughts of her mother and other loves ones. Pelphrey is expected to have his final air dates in early February. They completely filming their final scenes late last year and Pelphrey has already moved on to film projects.

While we are sad to see the characters go, particularly in such a tragic manner, they have certainly given us some of the best moments in the soap�s recent history and will be sorely missed. We wish them all the best and will not forget the wonderful contribution they made.