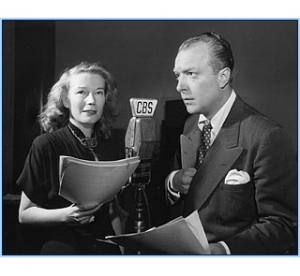 One of the early anniversaries (CBS)

This Thursday, January 25th, we are going to hit a major milestone in the history of soap operas. To celebrate, Thursday�s episode will be a special broadcast revisiting the history of the show from its beginnings. The shows creators are hoping to give everyone a glimpse into the history of the show, the manic pace of production and how much, or little, things have actually changed in 70 years. This will include re-enactments of scenes from earlier episodes featuring today’s stars as well as vintage and never before seen clips. Beth Ehlers (Harley Davidson Cooper Aitoro) will portray the show’s creator Irna Phillips and we can see how advertising and a social conscience combined to create a whole new kind of TV show. In honour of the show’s anniversary here’s the first in our series of commemorative pieces.

Guiding Light first debuted on the NBC red radio network on January the 25th, 1937. It was done live from Chicago to great success, only to be dropped in 1941. It was brought back from the dead thanks to a flurry of fan response and, in 1943, ran along with two other shows created by Irna Phillips to make up The General Mills Hour. CBS bought a share in the show from Procter & Gamble in 1947 and began running television versions of episodes on July 30th 1952. These were often run back to back with episodes of Search for Tomorrow, during lunch (each episode was only 15 minutes long then) and established the show as a consistent ratings winner well into the sixties.

Guiding Light was inspired by the radio sermons of non-sectarian preacher Preston Bradley of the People�s Church, which gave Irna Phillips hope as an unwed and pregnant young woman. The central character of the show was Reverend Doctor John Rutledge, who left a light burning all night so that people could come to him for advice. It was set in the rural towns of Five Points and Selby Flats before being moved to Springfield and concentrated on the tribulations of a series of immigrant families. Always important to Phillips was what she learned from Reverend Bradley, the importance of the brotherhood of man and the fight for civil rights. It was also from these sermons that she was inspired to use organ music as accompaniment, something which became a staple in soaps for years to come.

Irna came from a German-Jewish immigrant family with dreams of being an actress. She began working on radio and teaching Drama. She created the first serial drama for radio targeted at women with Painted Dreams. She also realized that a successful show needs sponsorship and began writing ad placements into her shows and made consumer objects part of the story. She then created the hugely successful Today�s Children which definitively created the soap opera genre.

In its earliest days, Phillips would write the show herself, along with episodes of several other shows at the same time. It wasn�t uncommon to see her surrounded by secretaries dictating dialogue to more than one show at once, with everything graphed out on her big chalkboard. Famous for her control, she terrified many of the actors and workers on the show, even battling to keep the show in black and white for years. She was also well loved and served as the mentor for the majority of the genres creators, from Agnes Nixon to William J. Bell. She would also create Day of Our Lives, As the World Turns and Another World. She stayed with Guiding Light until 1958 and then she moved on to her next show, remaining continually vital and influential in the genre until her death in 1973.