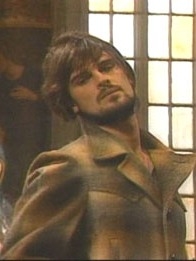 This week we saw Kane Manera return to the set of GL. We were first introduced to the attractive young Australian actor last fall in the role of Gillespie. Olivia had hired him to scare, and possibly kill, Ava. Luckily, he failed and just in time for Olivia to learn that Ava was her long lost daughter. He retuned a few weeks later, at the behest of Alan-Michael to vouch for Ava’s story of abduction at Olivia’s trial. When Ava dropped everything, he quickly vanished. He did, however, leave a mark on the show’s creative team who decided to bring him back in a surprising way: As Susan Lemay’s older boyfriend. While Susan has clearly shown herself to be no angel, hooking up with this sort of bad man must have been an inspired, rather than incidental, choice for at least one of them.

As we reported in the fall, Mr. Manera has been cast for an eight week stint on the show. The precise details have been kept secret, but expectations have been running high. With the looming prospect of Jonathan and Tammy’s brutal end, his character is poised to play a major role in it. We have already seen him break into Gus and Harley’s house twice and steal Gus’ gun. This is expected to serve as his tool for the job he was called into town to complete. The character marks a return to the sort of character we used to see more of, cold and mysterious career criminals. Speculation has already begun on what Gillespie’s back story could be. How do the Spauldings and Olivia seem to find him so easy to contact? Why is he with Susan, of all people? Many fans are desperate for a new villain, after the last year has made so many of the characters varying shades of grey. While Gillespie may not be this, if he does happen to be a killer, we may find him returning in the future, either for trial or another job.

Manera is a native of Perth, Australia. This is his first soap opera job. He moved to New York five years ago to pursue acting and has worked successfully in theatre and done several small independent films including Dead Serious, Coalition and the upcoming Goodbye Baby and Creating Karma. He studied acting at the prestigious Stella Adler Studio and has just wrapped up work on a film with Alec Baldwin and Sarah Michelle Gellar.