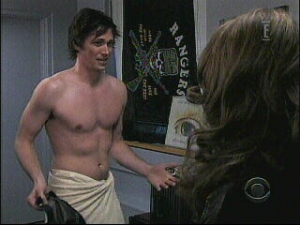 There were two Spaulding family dinners last week, which was startling since it has become such a rare event lately. They were both awkward, funny and full of the customary deviousness. Like most family dinner sequences on the show, there were plenty of nice little moments between characters, mostly between a grouchy Alan and all of the women in his life. They also provided a nice set of bookends for the week and a clear illustration of the current dynamic in the family. Alan arrived late to the first and sat at the head of the table, dumping the bag of ransom money he found as a way of confronting Lizzie and Phillip. They were stunned he found it. I guess they thought Alan never walks outside. He used the money to bribe a judge to keep Phillip in prison. Since Phillip was blatantly guilty, he likely would have gone away anyway. Phillip’s son then called in a favor by asking his girlfriend, the governor’s daughter, to convince her daddy to offer him a full pardon. Phillip was free and ready to celebrate. They did. Alan was drunk and uneasy with his son. Phillip was sober and uneasy with his son. Was all of this ridiculous? Yes. But it was fun anyway.

The big event, of course, was that James arrived in town. He was greeted in the obligatory shirtless fashion, so we know that he should be sticking around for awhile. Aside from looking remarkably like his parents, he also seems to have easily captured something of his father’s personality. That’s no small feat. Daisy was the first to meet him. She was searching for Grady and broke into her old dorm room only to find James. He was flirty, arrogant and cool-headed. After dumping the governor’s daughter, he crashed his father’s celebratory party and made it clear to Phillip that, while he may have saved him from prison, he doesn’t have any sympathy for him. The character has been clearly set up to mirror his father when he was his age, a potentially clever strategy since it allows them the chance to both reinvent Phillip’s past through his son and reinvent his present as well.

There were other positive things last week. Remy and Christina finally went through with their divorce. That doesn't seem positive but, since they do everything backwards, they had to get divorced to know that they love each other and, finally, to make love. Meanwhile, Lizzie and Bill were also doing everything backwards. Since they both fell into bed when they first met, they are now going through an elaborate dating ritual and avoiding sex. These two couples weren't the only one who suddenly turned into adolescent characters though. Shayne and Dinah spent the early part of the week lounging around in bedsheets, eating yogurt and making numerous double entendres. All of that was nice to see. Over the past few years, Guiding Light has really had a shameful lack of sex. It still doesn't really have any, just the before and after.

More worrying was that, after months of having him around without much to do, Edmund has suddenly begun to spin out of control. Shayne told him how Lara died and Edmund imagines that everyone has known all along and has been keeping it from him. He's in vengeance mode now. Poor Eddie. There's only one of him and he's battling half the town. Inevitably, he's going to lose, which only makes the entire thing that much less satisfying. There was plenty of opportunity to investigate a major psychological shift in one of the most complex characters the series has had in decades, but it was scarcely touch upon. Why is Alan the only villain anyone know how to write for anymore?