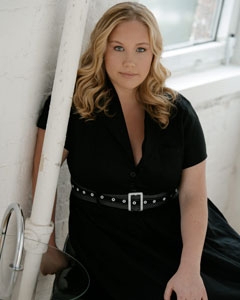 In this, the final of my interviews from Orlando, I caught up with Guiding Light‘s Caitlin Van Zandt (Ashlee Wolfe). She had been enjoying what may have been the best working week of her life and was enthusiastic about what a treat the final product will be for viewers. “These episodes are very reminiscent of things I used to watch when I was younger like ‘Step by Step’ and ‘Family Matters’, but particularly ‘Full House’, when the whole family goes on vacation to an actual location… it’s very light,” she said. Ashlee, Daisy (Bonnie Dennison) and Christina (Karla Mosley) wind up going down to Orlando after James (Zack Conroy) invites them down, all expenses paid. While he flashes his cash, half of Springfield runs around the theme park having fun and getting into mischief. Ashlee does find a minor love interest in the park for a vacation fling. “You meet good people. You have a good time but then you have to get back to your life,” she summarized. She also promised that there would be a little more of one of her favorite things – sharing scenes with Alan (Ron Raines).

The topic turned from what she was shooting that week to how her stories, or lack thereof, having been taking shape lately. She’s eager to see one of her stories take off, but understands that the show has been concentrating on other areas for the moment. Although she admitted that the continuity is often off when it comes to the way that Daisy and Ashlee’s relationship is written, she said that keeping them bright and light is, “A product that is easily salable and works into the doom and gloom.” Sometimes the show’s younger characters aren’t simply used as comic fodder, however. The Coop storyline comes to mind. “They needed a wham bam storyline and John (Driscoll) was the sacrificial lamb and it wasn’t personal… it was totally situational,” she explained, wishing her friend and former co-star all the best.

Despite some rumors on the internet, she assured me that her character was not being written out, she was just on the backburner. She hinted that this could be changing soon and brought up a few possible storylines that she’s been pitching to the writers. She misses getting into trouble. “A little bit of evil, cunning, underhanded activity needs to happen. Particularly since you don’t expect it from Ashlee and then you get shot,” she gleefully suggested. But she also had something more serious in mind and suggested that her character may be suffering from the number one disease diagnosed among women in their twenties – schizophrenia. “It would explain a lot of Ashlee’s behavior. It would explain a lot of her tendencies to the extreme. I would love to play that. Even do a stint in a mental institution or going through therapy… It is something we don’t hear about very much. It’s not broadcast very much that schizophrenia is such a problem in young women,” Van Zandt said.

At the moment, she may have something else to deal with: The revelation that her dear mother, Doris (Orlagh Cassidy), is a lesbian. After years of vagueness around Ashlee’s beginnings and Doris’ past, this hasn’t come as that much of a surprise to anyone, certainly not Caitlin and Orlagh. “We always joked about [this] so it’s kind of funny… Orlagh herself always played her as a cold-hearted lesbian,” she explained. For that very reason, even an actress as seasoned as Cassidy literally spit out her coffee when she received the script which revealed that Ashlee was her daughter. The two women have always had an odd relationship, but it’s become more complex and nuanced over time, something which Van Zandt would like to see extended. “It’s going to be really interesting,” she suggested. “I don’t know what her reaction will be. My guess, her reaction is going to be actually what I’d presume if anyone in my life told me they were gay and didn’t tell me beforehand, if I’d known them forever and never known. My reaction would be: Do you not trust me with that? Do I make you feel vulnerable? So I hope there’s a bit of that because to find that out from your mother, I’m sure that can be slightly jarring.”