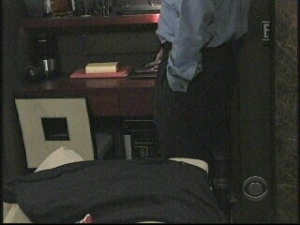 Last week was a good week. The pacing is up, the new plots are taking up more time than the old, and a few elements of the past were given more play. Shayne’s behavior became clearer. He blames himself for Lara’s death. Only Dinah knows and she continues trying to act as his protector. But it’s not easy for her to do that when Reva is in her protective mother bear mode. Since Olivia isn’t in shape to give Reva a fight, Dinah seems to have been selected for the task. She’s certainly up to it. When Dinah gets nasty, she can compete with the best of them. Perhaps that’s why her confident, yet careful, behavior this past week came off as strangely threatening. Reva blew up at her repeatedly and got obnoxiously self-righteous. The only person in Springfield who has ever been nearly as delusional about their parenting skills, or just basic people skills, is Alan. While Reva admitted that she was off base earlier in the week, it didn’t stop her from going for broke at the end of the week and getting personal in her insults, all but calling Dinah a circus freak. Making things more awkward, Josh and Reva pushed to have a memorial for Lara, with or without Shayne. He reluctantly attended and thanked everyone. His family thought this was helping him heal, but he promptly went outside and tried to kill himself.

Coop also found himself being less than successful on the people front. After Lizzie spotted the young Mr. Bradshaw with her mother at dinner, she ran off and he stalked after her. As he tried to explain, she thumped him. Lizzie slapping Coop was refreshing. That she slapped him twice was even better. Her disgust over this, and Bill, seems to be driving her to Cyrus, who is as devious as anyone else, but honest about it. The girl has become so distraught that she gave her little dog away. Bill quickly grabbed Roxy from Lillian while they were walking. Maybe she forgot that he almost killed the dog last time he was supposed to look after her. Then he ran to Rick to demand Phillip’s whereabouts and prepared to run off in pursuit. Even Rick found Bill’s desire to bring Phillip back somewhat odd. Phillip and Bill hate each other (hopefully that won’t change – Bill needs more enemies than Alan and himself) and Phillip had a habit of occupying even more of a moral gray zone than Bill does. It’s intriguing to wonder if Phillip’s return will make things much worse for Bill and Lizzie… Actually Rick had a pretty good week, making some of his rare appearances outside of work, sober and having non-medical conversations with people. Beth confessed her affair to him. His reaction was wonderfully mixed. All that he could say for ‘little Coop’ was that he was younger than Alan.

More scandalously, everyone at the little school event thought that Natalia and Olivia were lesbians. Olivia actually had to kiss Nat to explain since none of her other hints were working. Natalia was mortified and ran off to explain. Have we heard the end of this, or is this simply a hint of things to come? Olivia was terrified, then laughed it off and then seemed almost indifferent. She certainly was rather sad when Natalia went off on a date with Frank. I assume she is just a bit lonely and frustrated, but it's enough to give fans of the possible pairing a flicker of hope. That said, I still have the impression that this incident has more to do with flirting with publicity than it does with a same sex relationship. For those who have wanted to see a Frank and Natalia pairing, there is a little more hope. But, given Nat's reluctance to pursue such things over worrying about her son and Olivia, I'm not sure any other kind of relationship can actually work for her. Even with Gus, their reunion was mostly in the interest of Rafe. Beyond that there wasn't much more than nostalgia.

Buzz continues to swoon and even collapsed this week. Justin Deas is doing what he does best – making unusual choices. He does a great job of channeling his inner silent film comedian into this potentially depressing plot. Remy and Christina had to help him off the floor of the mini mart. Their relationship developed a little more this week and they shared a few kisses. Meanwhile, Mallet and Marina continued to opt for adoption. While being question by an adoption agent, he suddenly recalled that there is a huge gap in his unemployment record from when he stopped being a cop and became a hit man.

As for many others, the highlights of the week for me was seeing Edmund return. Bringing him back as Lara's estranged father may be convoluted, but if it brings evil Eddie back, I don't care.