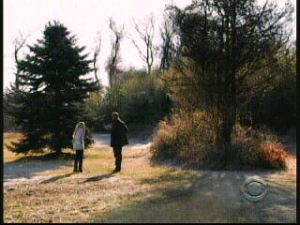 Okay, it’s official. Bill has to be the most… I can’t even think of the right word. Dumb? Deranged? I’ve always thought he was kind of a jerk, but I can forgive that because he has other qualities, however, last week was too much. Once again, in a desperate attempt to win Lizzie back, he did every that he must have known could only make things worse. Not only did he ‘kidnap’ her and force her to try and re-experience what she went through, he read her diary again and used it to manipulate her feelings. I know that he is desperate, drunk and has always been slightly crazy, but this is ridiculous. What makes it even more ridiculous is that I’m sure that they’ll still end up together again. Hopefully, that won’t be for some time. They both need a break and I think that viewers, and the show itself, would be better off if two characters that have as much to offer as they do, stop being squandered in this plot.

At least Lizzie has something else to be annoyed about to keep things interesting. After Coop kept pressuring Beth to make their relationship public when she wanted to keep it in his bedroom, he stalked over to the mansion and kissed her. Lizzie spotted them and gagged before chastising her mother for being a sleazy cougar. It injected some needed passion into this plot, which has been too low key so far. Strangely enough, I get the feeling that we are going to be endlessly poked with reminders that Coop was once Lizzie’s boy toy and yet we almost never got that when Lizzie and Bill hooked up. Beth and Bill were more of a real couple than Coop and Lizzie ever were. Lizzie and Bill’s relationship has always irked me a lot more for that (as well as their many other problems). Coop and Beth are sad, but in a slightly morose and romantic way. They delude themselves, but seem slightly conscious of it, and this allows a certain pathos. But there’s nothing like that in Bill and Lizzie. It’s just a delusional relationship.

Most of Springfield’s Lewis family ended up in jail last week (with the exception of Billy who seems to interact very little with Shayne). Shayne was put in after attacking a man in the park when he saw him roughing up his girlfriend. Reva and Josh got themselves thrown in with him so he couldn’t avoid them anymore. Jeffrey wasn’t happy and tore a strip off of Reva for her shenanigans. Audiences got the rare chance to see her back out of a fight twice in one week: Once with Jeffrey and later with Dinah. We finally learned the truth about Shayne, or some of it anyway. The love of his life died in an explosion. He blames himself for it. In an added bit of misfortune, someone else may blame him as well. A mysterious man has been following him around. Shayne and Dinah had more fights. There are lots of arguments on the show generally, but for the past week, the fights actually served a purpose and illuminated more of the characters’ lives. However, the moment in all of this that I really enjoyed was watching Remy and Josh share a nice, quiet moment on the park bench. Josh seems to have taken on the ex-preacher thing well.

Grady continued his work for Doris. Ashlee seems impressed, maybe too much so. She helped him out when a corrupt contractor he threatened showed up with his mother and threatened to have him killed. It was one of those comic sequences that doesn't really work.

The Natalia and Olivia story continued. Emma read her report, "My two Mommies," to the assembled parents and town residents. Olivia's jaw dropped because she knows what people will think this means. I don't have a problem with them becoming a lesbian couple. If that's what they've been intending, I actually think they've done a great job and created one of the most organic, nuanced and potentially profound relationships in recent memory. But I doubt it will go that way, at least, not any time soon. I just feel like we're being teased by the illusion. While that's frustrating, I have to give the show credit for creating a stir over the whole thing. It's been awhile since any of their plots got much buzz outside of their regular viewers. I know many Olivia fans don't like this much softer side of the character and I can feel their pain. I always adored her when she was vindictive, cynical and brutal. Sadly, there seems to be little room for that on the show. Hopefully that will change when Edmund comes back this week.