Mallet went in for a routine physical and the doctor ran a biopsy on a growth he found on his back. The cancer scare was brief, which is good since viewers of the show are suffering from disease fatigue, and ended with him deciding that he really wants a baby. It also tied him into the ‘miracle’ theme they’ve been playing with for months. That was the perfect reason to bring Reva in to eavesdrop and interject. Not only did she have cancer, she also has a miracle baby. Didn’t we watch Gus and Harley go through a very similar plot not even two years ago? I must admit that I’ve never been a fan of baby plots, whether it’s making them, having them by accident, or stealing them. In any case, it rarely leads to surprises and usually depends on a lot of lazy emotional manipulation on the part of the writers.

Shayne ran to the rescue…again. This time he helped out Dinah, though he could have gotten her killed in the process. They still intrigue me the most as the best possible couple on the show. They are both fundamentally unsettled characters, something made more interesting by how intimately they’re tied to the families of the town. I like where they are -- not quite in anything, just hovering. Whenever someone settles into a relationship in Springfield, they manage to become boring. 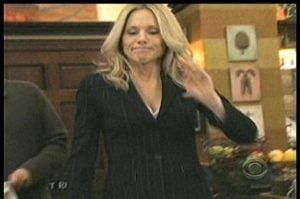 Last week was peculiar. Things felt more random for some reason, which was odd because they weren’t. As is commonly the case, Monday and Tuesday were taken up with one story, which then returned for part of Friday. The disparate plotlines that wove through the center of the week, while they had certain thematic echoes, didn’t cohere, resulting in a week that felt unfocused.

Bill admitted that he can’t remember whether he kidnapped Lizzie or not. He tried to do the right thing and moved out of the mansion. He then hung out in bars and listened to Daisy talk about how important his love for Lizzie is. She found him a hypnotherapist and they had to enlist Lizzie to help. I guess all of this highlights how genuinely off-kilter this entire relationship is. Bill may not know if he did it or not, but he certainly knows that he could have done it. Lizzie knows it too, but she’s been masochistic enough when it comes to men that her reluctance to completely abandon him seems in character. But we knew all of this about them already. My only question is, why do they seem so intent on turning Daisy, who used to be a cynical and manipulative schemer, into a dim-witted romantic? Is this a sign that she is more like her mother than she would like to admit? Is that why she had Grady cleaning the kitchen and looking sheepish? Another wild man fallen prey to the domestic trap of the Cooper women. But what really disappointed me in all of this was that they got Bill drunk and gave him a guitar but didn’t let him sing.

The Beth, Coop and Alan triangle continues. I’m on the fence about it, mainly because I expect more passion, and sex, from affair storylines. This plot doesn’t feel torrid, it feels shrouded. I like my soaps sordid. In a topical, and somewhat ironic, twist, Beth managed to convince Alan to help out Buzz and become the new landlord of Company. How many times has Buzz almost lost his restaurant by now? I’ve lost count. Both the Beth affair and the Company bailout will be pointing their own indirect ways to the return of Phillip.

What's Going On With Guiding Light's Natalia and Olivia?