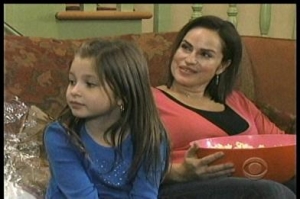 Last week was short but we got out first taste of a fresh year of the show. So far, a few things have changed. After weeks of frustration between Natalia and Olivia, things finally cooled down and they’re warming up to each other a little more. Olivia seems to be becoming a rather different creature than we’re used to. I can’t quite put my finger on it, but something in the character’s general demeanor has changed. Whether that is inconsistency or nuance, it’s not clear at the moment. Whatever the fluctuations in Olivia’s character may be, I just wish that Nat’s character would change a bit more; she’s a little too tightly wound. Hopefully someone will help her loosen up a little. Maybe that’s where things are going with Frank. They finally had a date. Considering the way that many of the other people in Springfield like to leap into bed, it’s almost subversive to have two tepid and shy people there. Can bashfulness be exciting? I wonder…

Things have also changed a bit between Grady and Ashlee. She no longer loathes him. Maybe she never did, maybe that was all an act that that came from jealousy… or maybe she just changed her mind. She was attracted to him before, but is there anything mutual there? I don’t really see it. I do see something between Doris and the Aussie. Perhaps that’s just because I’m desperate to see Doris in some kind of relationship, however awkward. Doris is more in Grady’s league, at least in terms of villainy. He never did well with Alan or with Dinah – they were both more accomplished (and crazy), but Doris is more of a second tier villain: Selfish, manipulative, sometimes stupid and mediocre, but lonely and without the sort of ego problems that major villains have. She and Grady have all of that in common.

It was actually kind of an odd week. Not that much happened in terms of story. The charges against Bill were dropped because the evidence was destroyed. He continues to wonder if he is guilty. But that seemed to take a backseat to a lot of little moments. One curious incident was having Rick show up at Matt’s office to help him fix a toy. They just sat and talked a bit about their kids. It was nice. I wish they would do that sort of thing more with the characters who have been pushed into the background.