Last week was the big holiday week for the show. Strangely enough, that didn’t make it seem more thematic than usual. It actually followed its plotlines pretty closely and integrated the holiday into them without it seeming forced…for the most part. I liked that they put Buzz in a Santa costume, but they didn’t do as much with it as they could have; it just seemed thrown in. They seem to need to put Justin Deas in that hat once a year.

Shayne is quickly becoming a focal character and in a way that seems organic. Watching Josh and Jeffrey battle over him with Reva allowed all of them to mark out their territory. Josh has leaped from being concerned about Reva to being concerned about his son. Much as he does with her, he tends to overreact and become overprotective. They shared some nice father-son moments playing darts and it was good to see Jeffrey and Reva include Josh in their holiday celebrations the way they did. More interesting for me has been watching how Shayne’s relationship with Dinah is developing. The pair have some real chemistry and he is going through something very similar to what she went through not that long ago.

The rest of Springfield’s families had a far less festive Christmas. There really wasn’t much of any holiday cheer among the Spaulding or the Lewis clans. Bill began accusing Alan of being behind the kidnapping. Dinah had to come to Alan’s defense and Bill has been left in a state of unravelling while Lizzie is off in China. His father has become more supportive, if still doubtful of his son’s innocence. I’m always left feeling like their relationship is under-explored. There’s obviously so much between them, but, ever since Bill initially returned from Venezuela, a full reckoning between them hasn’t come out. I suppose that’s where a lot of the tension between them could come from, but it’s often played a little too cooly. With Lizzie momentarily out of the way, I really wish they’d explore Bill’s relationship with anyone other than Dinah for awhile. Watching him argue with Alan can be amusing, but I’d rather see him have a real conversation with Vanessa.

Besides, Alan’s going to have more trouble soon enough. Beth’s holidays have been pretty hectic while she flits between Alan and Coop. Coop idealizes Beth and she does more or less the same to the younger man. I guess because he’s a sort of frustrated artist, it makes his character somewhat reminiscent of her own ‘artist’ stage from years ago. I know a lot of viewers aren’t feeling this relationship that much. I think that has less to do with the plot itself than the way it’s being told. Their relationship never developed; it was randomly introduced and, since then, it’s been about the fallout. It’s an unusual choice to write a relationship plot into a pool of characters rather than from two characters and then spanning out. I think it’s made the whole thing diluted. There’s not enough focus, not enough passion. Most of the passion so far has just been Buzz getting distraught…and what happened to Buzz and Alan being best friends? There’s no trace of that anymore, but I always thought that it ran a little deeper than Alan’s neurological problems.

There are plenty of other oddities in the relationships of other residents as well. Olivia and Natalia continue to act out their odd couple routine with little Emma caught in the middle. I know she was there to be cute and bring the two battling roommates together, but I just kept thinking about what will happen when Phillip comes back and sees her. I enjoy Olivia being a grump, but I fear it’s wearing down. At least she still cringes when she does something nice. Meanwhile, Remy and Christina got around to solidfying their relationship a little more. She was sure that he would run off with Ava but that’s not going to happen. Ava’s return was brief and to the point, perhaps too much so. After she departed, Christina told him about her mother’s death while doing holiday shopping. That’s what inspired her to be a doctor. That’s a bit of a maudlin explanation of her character frankly; I really hope there’s more to this woman, but, so far, she doesn’t even have a maiden name. 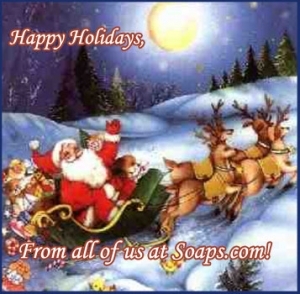