Guiding Light Blog: The Trip to Peapack: Part One

Returning to 'the house', we went out into the fields where Ellen Wheeler and her crew were directing Daniel Cosgrove (Bill Lewis) through a dream sequence. The crew members spanned all ages and joked with the camaraderie often found in tightly knit groups that work long hours. The average day of shooting at Peapack will begin at six AM and span till five in the evening during the winter, later the rest of the year when the light lasts longer. This was difficult at first, we were told by a director, but they have now worked out the scene scheduling and how to use what is at hand so well that production has become a 'well-oiled machine' capable of shooting up to six scripts a week. Although that sounds almost impossible given the usual speed of TV work, watching Ellen Wheeler literally running around the set and conducting her crew with precision and discipline made it believable.

Of course, it wasn't all work. Although Cosgrove nearly fell in some freezing water while climbing rocks for a sequence he shot in the morning, he couldn't go more than a few seconds without cracking a joke or launching into hilarious mime routines and, although everyone laughed, everyone remained focussed. We watched the scenes being filmed through tiny handheld monitors with which you could skip from one camera feed to another and watch the scene from multiple angles. Later, we watched Cosgrove shoot a scene with Jordan Clarke. Everything was set up and shot with extraordinary speed. Usually four cameras film a scene, each with a different angle and distance, and scenes are almost always only shot once, giving everything a raw, improvisational feel, even including the occasional mistakes.

Over the next few days, I will be posting more about my trip. This will include a discussion with Jill Lorie Hurst where she will explain how the writing on the show works and what audiences can expect in the future; a chat with the irrepressible Kim Zimmer about her feelings on the state of the series; a talk with the intense Ellen Wheeler about how she sees the show's transformation and a tour of the CBS studios... and maybe I'll throw something else in, I'm still exhausted. I hope that everyone enjoys these articles as much as I enjoyed this adventure.

Earlier this week, I had the good fortune of being invited by the people behind the scenes at Guiding Light to come down to New York City and Peapack to tour the sets, meet with the actors and observe everyone while they were hard at work. This unique opportunity was also extended to four bloggers (Roger Newcomb, Sara Bibel, Michael Fairman and Patrick Erwin) who accompanied me as the highly hospitable, and very open, people from Televest Media showed us around the little world that creates our favorite soap. The purpose of the visit was to reach out the critical community, particularly to those who genuinely care about the show and its future, and open a dialogue with them about where the show is now and where it will be going. Over the next few days, I will be posting about my experiences and the conversations which occurred. My sincere thanks go out to Alan Locher, Cristin Callaghan, Jeannie Tharrington and everyone else involved who helped make this event possible.

After spending the weekend drinking a little too much at the Christmas party, I jumped on an airplane on Monday and flew down to New York City to stay in a nice little boutique hotel in Manhattan. After a night in fitful sleep, anxiously anticipating what the next day would bring, I woke up early and waited for the day’s activities to begin. After going down to the hotel lobby, I met with my contacts at the show and with the other bloggers. Together, we drove out to Peapack from New York, encountering little traffic on the way. We even passed a turn off to a nearby town that was actually called Springfield. When we arrived in the green and hilly area in which Peapack is situated, several of us shared the odd sensation that the landscape was eerily similar to the places where we had grown up. As we drove into the town, it was easy to start picking out the various building where scenes were shot.

After a lunch with Co-Head Writer Jill Lorie Hurst and Producer Alexandra Johnson-Gamsey (more on that in an upcoming article), we went out to ‘the house’, a multi-purpose building which has been transformed into various sets for location shooting. Nearly every room in the house was a set for a different room in Springfield, while the remaining rooms were packed with equipments or transformed into dressing rooms and a canteen. Cross Creek’s main parlor was located right across from the Spaulding mansion’s dining room. Reva and Jeffrey’s mantelpiece still has ‘Always’ carved into it. Everyone stood around for a solemn moment and photographed the iconic word before Marcy Rylan wandered in to greet us, sporting a pair of heels that must have been treacherous to wear outdoors. After a warm welcome, we filed off and she went back to work. In the Spaulding dining room I stared over at the mantle photos above the fireplace that I have seen so often, particularly the photo of Phillip, which has so often been part of Alan and Lizzie’s ruminations, but will soon be replaced by the real thing.

Upstairs, we could find many more sets, some of which have yet to be seen on the show. These included Ashlee’s new apartment, a room for Cyrus and Grady which was built and will be quickly torn down to make way for a different room, and more bathrooms than I’ve ever seen on one floor of a house this size. All the same, things felt remarkably lived-in and comfortable to a degree that I haven’t normally encountered while visiting a set. Wandering down the hall, we ran into Jordan Clarke (Billy Lewis), who was as gentlemanly and shy as one might expect. After joking around a little, he told us that he stays far away from the internet, unlike Kim Zimmer who is ‘fearless’ and shows up to argue, even when she knows people are waiting to bait her.

Outside, we were ushered into a van and taken for a tour around the town by Lou Grieci, the Director of Production Services. He languidly drove us over the curves of the countryside, pointing out the window as we drove up to the many house and business buildings which doubled for Springfield. The real police station is transformed into Springfield’s by placing magnetized labels on the sides of the cars; Cyrus and Grady’s little house is located on the other end of its parking lot, which also serves as the parking lot for Cedars; the church yard leaves an empty space where Tammy’s grave can appear when necessary. The startling proximity of all of these locations, and their ability to seem distant on camera, is even more striking when one sees just how expansive the park where so many of the outdoor scenes are shot really is. While we drove along it, Grieci told us of how much the townspeople have welcomed them in and how enticed some of them have been by their presence. One woman even came out with her dog while they were filming in the park. Seeing that Marcy (Lizzie) was shooting a scene with Roxie, she ran into frame while they were shooting and shouted that her dog was prettier and deserved to be on TV more. 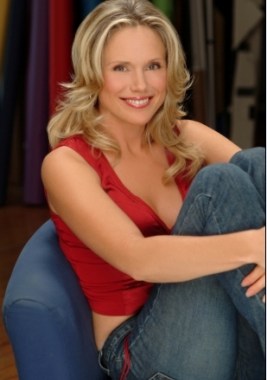