The Coop and Beth affair continues. I still don't know how I feel about it. There has not been much passion or depth written into it so far. Maybe that's the point, but that seems to be the way that many of Coop's relationships go. If the character was given the inward looking angst he seems to be meant to carry (explaining his occasional violent outburst), it could work, but that's never been sufficiently developed. Instead of being a frustrated, slightly intellectual romantic, he comes off as just another male Cooper – well-intentioned, but sort of dull, like Frank, who practically had to have Rafe kick him to ask out Natalia. The only glimpse of anything else in Coop is when they give him beer to drink and he can stare off into the distance. He had what was potentially a dramatic scene this week when Alan tracked him down in the mini mart. I confess that I was distracted by the line of pumpkins in the scene and the odd way it was shot. Considering how often closeups are used, I would assume that, in a scene which was largely concerned with tension, there would be a more exacting concentration on the reactions between the characters. Instead, there was a surprising distance that made the scene feel detached. The only real sign of tension in it was Coop brushing up against the candies which had been framed for optimal product placement.

Eleni returned. Although she initially gave Mallet and Marina a hard time, given his past with the family and her past with men, that quickly vanished. The switch was a little too quick. The selling point for the Marina-Mallet relationship has always been their ease with each other. That is also their chief weakness and one of the reasons why many viewers find them dull. Marina has always been defined by having bad relationships. Mallet hasn't fared much better. If you take that away from them, what's left over seems to amount to some light neurosis and the occasional joke. I suppose that may be a welcome change from the drama, successful or not, of many of the other relationships on the show. Certainly, a light relationship can offer charm, but it's largely a matter of contrast and balance. As Mallet admitted this week, his other relationships were about drama, but there isn't any in his relationship with Marina. If such a relationship becomes focal, it becomes dull. The writers must realize this, thus the return this week of Shayne and Dinah, but I've yet to be convinced that any degree of opposition can still make Marina and Mallet a captivating couple.

On a more positive note, we finally got a little time with nu-Shayne. So far, aside from a brief phone call to his mother, he's only interacted with Dinah but he's already provided some promising new energy to the show. Although he's clearly in the angry young man mode at the moment, there is enough nuance in the performance to indicate more. I'm optimistic. 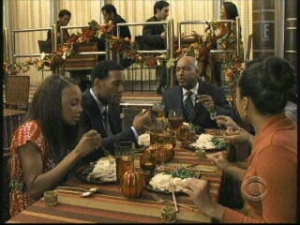 The Bourdeau family Thanksgiving opened the week. It provided a nice contrast with Cooper’s from the previous week. The humor took less effort, surprising, given how little time we really get with the entire family. We also got some time with the new Leah, who seemed to fit in quite comfortably. I’ve always wanted to see more depth with this family. Like a lot of viewers, the characters often seemed forced and come off as dubious over-achievers. That’s softened in their past few appearances, but there is a genuine awareness of this on the part of those writing them. That is why we actually got to watch Christina walk to ‘the wrong side of the tracks’ and then mock it, in what was a deliberate skewering of the social cliches that have haunted the characters. I still enjoy Remy and Christina and believe they have potential, but I still think they are being forced a little too quickly into couplehood.

Bill is out of his coma and quickly returning to his old self. He’s become obsessive since discovering that he was indicted. After finding a scar on his chest that was identical to the one she gave the kidnapper, Lizzie began questioning his innocence. She kept that to herself and is now over-compensating. This is allowing her to develop some more shade to her character and some friction between her Bill and the rest of the Lewis family that may have lasting effects.