The end of the week was dominated by the Thanksgiving episode. As is often the case, it was a Cooper family Thanksgiving and, despite the talk about opening Company to the whole town, we never witnessed restaurant holiday chaos, only grumpy Marina in the kitchen. It was one of those 'bittersweet' episodes filled with humor and the occasional glint of pathos. Sometimes, they really pull these episodes off, and they accomplish the complex balance of emotions that no other soap quite does. But this year's Thanksgiving episode was profoundly mixed. There was just something off about it. Lizzie's conversations with Billy about Bill were less focussed and even seemed less sincere than they often do. Although the Spauldings apparently had a family dinner, Lizzie ducked out and we weren't treated to Alan's usual bitter holiday tirades. I think if they had included that, adding a little more contrast between the two events, it could have gone a long way. Bill woke up at the end of the episode, offering the show the chance for the same sort of problematic 'miracle' that it's so fond of. Remember two years ago when Sarah was born during a snow storm in the back of a car? Now Bill's awake so he can be arrested. It doesn't have quite the same bite, but it's the same idea. Far less exciting outcome of the episode: Mallet and Marina still want to get married was basically what it amounted to.

Strangely, the highlight of the week for me was watching Matt and Blake, two characters with actual chemistry and interesting histories, spend several minutes enacting a V8 commercial. I don't have a problem with the product placement or with building commercials right into dialogue. Guiding Light started out that way; I think it's kind of cute. It just bothers me that they've relegated strong characters of the past to do it. If they start making Lizzie and Bill do Pringles or body spray commercials in his hospital room, I'd be happier. 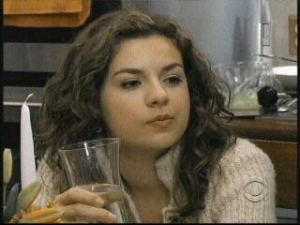 Because of the holiday, it was a short week last week, but a lot was packed into the first day or two. Doris pushed ahead with her charges against Bill. With Alan’s help, she managed to get the jacket back into evidence after Lizzie had it removed. This was enough to lay charges. Bill woke up at the end of the week. His eyes won’t be open long before Frank is ready to give him the bad news. I really don’t enjoy watching Lizzie be turned into an obsessive wreck when it comes to Bill. I hope this is merely a side-effect of the trauma of being kidnapped. More enjoyable was watching Alan’s brief interactions with Doris, one of the only couplings in the past two years to get me really excited.

Meanwhile, Remy and Christina raced around town trying to get an annulment to their drunken marriage. They didn’t manage it, since she blew up at the bureaucrat who was meant to sign the paperwork. Her fits of anger seemed to impress Remy. They twinkled their eyes at each other. I guess if you get married before you’ve even had a date, it would be an understatement to say that the relationship is rushed. Elsewhere, Jeffery worried about what choices Reva would make. She was relieved to see Dr. Colin McCabe return to help her out, offering to treat her and the baby simultaneously.

Guiding Light Video Clip: Bill's Back, but For How Long?