Olivia and Jeffrey Sort Out the Past 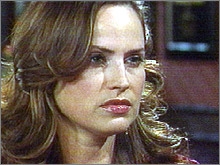 Jeffrey has a lot to lose (CBS)

Through the week of November 6th, Guiding Light will be opening up a Pandora’s Box that may change things in Springfield for a long time to come. That week, the murky pasts of both Olivia (Crystal Chappell) and Jeffrey (Bradley Thomas Cole) will become unraveled. To do this, young actors TJ Linnard and, the already impressive, Alice Kremelberg will be taking us through the early years of the two troubled and mysterious characters.

The episodes have already attracted controversy for their 'he said'/'she said approach.' The conundrum is that neither character has ever been exactly honest and each is known to survive by sheer manipulation. The revelations will come at a crucial time for both characters. Olivia's veneer has begun to fall away and she finally has a chance at reconciling with her daughter while Jeffrey has a chance at his dream of being mayor. Rumors are that a very public accusation of rape will cost Jeffrey the election, even if it turns out to be false. It won't be the first time that Jeffrey's been accused of rape. He had relations with Cassie while impersonating Richard that crossed numerous lines. The plastic surgery that allowed him to play that role may be what's been keeping Olivia from unveiling his true identity. Meanwhile, the often mentally unbalanced Olivia, trying to remember through a haze of alcohol and age, will be calculating exactly what she needs to do to protect herself and her daughter. Look for a lot of slippery drama and a chance for Bradley Cole to show off his acting chops on Wednesday's In the Light.