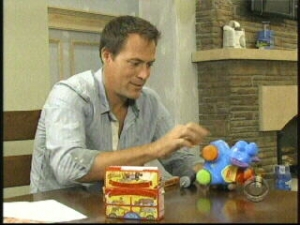 Blogging from the Beacon.

Mallet got to act with a baby last week. For some reason that’s what stuck out the most last week. While the baby is cute and Mallet can certainly smile at a baby while fumbling with batteries, it was a rather odd thing to put that much attention on. It was another of those peculiarly drawn out scenes that had a point (Mallet can get along with children) and then went beyond what the point was and just became strange. They’ve been doing this on occasion. Grady trashing Harley’s lawn would be a recent, memorable example. I’m not exactly sure why they shoot scenes like this. They seem to be deliberately overlong, and it’s not just about filling in time, because that can just as easily be done in other ways. It’s about creating a raw and awkward moment; something very unpolished and unique. While trying for that kind of thing was normal in John Cassavetes movies thirty or forty years ago, it’s genuinely odd to see it crop up on Daytime television. I’m not saying it’s good or bad, but its happened enough that it seems to be part of what makes the show what it is.

Most of the week was Bill and Lizzie bickering like usual. There were a few developments. Since she asked Alan to move in with them, he asked his parents to move in as well. This could be good, or it could end up looking like a bad sitcom, we’ll see. I’m just thankful that Alan is now out of the hospital and on his way to being more like his old self. Gus seems quite out of his mind and soon, hopefully, will be completely forgotten. Beth seems thrilled to an almost disturbing degree. Maybe she knows this means she’ll get lots of work when she finally becomes a lawyer. And speaking of Beth, why is everyone suddenly checking her out again. First Frank and then Coop. If young Cooper wanted an older woman, he should have taken Blake up on her offer when he had the chance. The hint of that was something I was looking forward to and they quickly dropped it, and Coop, to focus on Ashlee becoming more annoying than usual. The cruelty!

Josh was put on a 'bad list' so Cassie had to recruit Cyrus to try and help her talk to the ambassador and put a good word in for him. I'm not sure what he did for that to happen, he just built a veteran's hospital after all, but seeing Josh incarcerated in one form or another always makes me chuckle. I have no idea why. Anyway, I assume this was just an excuse to get Cassie and Cyrus working together on another odd scheme. They snuck into a party to talk to the ambassador and put in a good word for Josh. Since Cassie used to be royalty, no doubt someone will recognize her. And since she used to be royalty, why was Cyrus giving her so much advice about how to act like rich woman at party? Anyway, I still enjoy to watch the pair of them bumble around and, like some viewers, I'm sad to know that, with Nicole Forester leaving and this is going nowhere.

Rafe was sent to prison for two years. I don't think anyone was surprised. Sadly, I'm not sure much of the audience cared either. I don't even know what to say. They made an odd choice dramatically by having almost everyone focussed on Rafe; there was no conflict about reparations, revenge, or anything else. No conflict, no anxiety, no tension, just sadness and disappointment. It doesn't make for the most captivating television. It did let Frank edge a little closer to Natalia and give Daisy some focus in her life. And speaking of Daisy, she's suddenly gone gung-ho for this teen task force thing which probably breaks more laws than it has criminals to capture. I feel a bit like Doris on this one: Do we really need another Cooper on the police force?

GL's Frank Dicopoulos to Appear at...