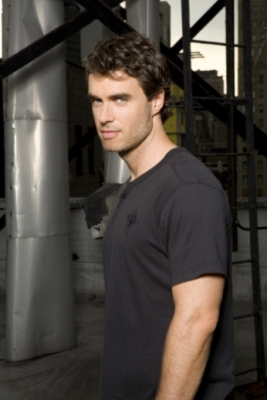 When I first heard about the part of Cyrus, I knew this newcomer to Springfield would be trouble, but I had no idea how much trouble he would cause or how charismatic he could be while doing it. Australian actor Murray Bartlett joined the cast of Guiding Light on March the 9th, 2007. Since then, as Cyrus Foley, he’s blackmailed his former crime partner, Dinah, back into the game; married Alexandra Spaulding to take her for all she was worth; seduced local detective Marina Cooper into betraying her family and profession; had an affair with her aunt Harley after surviving a building collapse; slept with the local minister’s wife and various other misdeeds. Of course, not all of his bad behavior has been intentional and he’s revealed that there’s more to his persona than simply being a rogue. Much of what has made the character different than the run-of-the-mill daytime badboy comes down to Mr. Bartlett, who manages to imbue his character with a disarming charm and surprising sensitivity at every turn. We were lucky enough to have a chance to chat with the actor about his role, his technique and his thoughts on the character’s future.

Matt: Previous to making your way to GL, you appeared on a variety of soaps in Australia (Neighbours, Home and Away). Could you tell us anything about the differences between working on Australian and American soaps?

Murray: One of the main differences is that on Australian soaps we spend a significant amount of time shooting scenes on and around the beach. Very nice! There are some subtle production differences, but nothing major.

Matt: Cyrus has already hooked up with several of the women on the show; can you give us any clues on a future romance for Cyrus?

Murray: Cyrus and Cassie are starting to spend more time together, but he’s still pretty hooked on Harley. And in occasional interactions with Marina, it’s clear that there are still some sparks there. So there are a number of possibilities that may unfold. And isn’t Natalia still single? Hmm…

Matt: Recently the relationship between Cyrus and his brother, Grady, has become central. How are you enjoying exploring this different side of the character and a different sort of relationship?

Murray: It's been great to have a brother to play with. Family can be such a key to understanding a character so it's been enjoyable as an actor to explore that, and has provided an opportunity to show some different facets of Cyrus. In the context of family, a character gains another dimension, and it tends to illuminate many things about why a character is who he/she is. That's fascinating as an actor, and hopefully fascinating for the audience
too!

Matt: On screen you seem quite comfortable with the new look of the show. How has the dramatic change in the show's style affected the way you work? What are some of the positive and negative things about this new approach?

Murray: I am a big fan of the new production model that we are using on Guiding Light. I started work on the show as the new model was gradually being introduced, so the changes haven't been jarring for me. I really enjoy working on location which is a significant part of this new process, and I also find that the new model is much more supportive of a very real, natural style of acting which I love and I hope the audience enjoys. Sometimes I find the lack of rehearsal in the medium of Soap Opera a little disconcerting because I would love the time to make it the best it can be. With rehearsal, you can build a solid foundation. And our rehearsal time in the new model has been reduced. But that said, I am growing to love the
improvisational aspect of this work and am enjoying exploring the spontaneity of it.

Matt: Which direction would you like your character to go: Would you like him to become lighter, more loving and caring; or return to his darker and more mischievous side?

Murray: I'd like to keep sight of the loving and caring side of Cyrus, but definately want to return to his darker more mischievous side. I think it's interesting to show the conflict of those two sides within a character so I'd like to take him down that road.

Matt: What has been your favorite scene or episode since you joined the series?

Murray: Beth Ehlers (Harley) and I built up such a wonderful working rapport and friendship, that I would have to say any and all scenes that I did with Beth were a highlight for me. It was such an easy and enjoyable working relationship.

Matt: If Cyrus had a theme song, what would it be?

Matt: Have you been looking forward to going on the Soap Cruise? Have you ever been to Mexico or the Keys before? Is there anyone special you'll be bringing along?

Murray: I am extremely excited about going on the Soap Cruise. I've heard from people who were on the last Soap Cruise that it is an absolute blast. It's going to be a great group of people in a fun, warm, relaxing environment. What could be better than that? I've never been to Mexico or the Keys and I've never been on a cruise so it'll be a real adventure for me. I can't wait!

Soaps.com sends our thanks to Murray for taking the time out of his busy schedule to give us a great interview. And remember, you can catch more of Murray's answers in upcoming articles in our News room. To read more about the upcoming Soap Cruise, please click here and to enter the sweepstakes for this event, please follow this link.

I'm looking forward to seeing where he pushes his character in the future and wish him the best of luck!