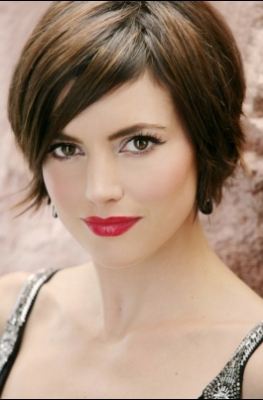 For those who have been hoping that this year’s summer love quadrangle (Ava-Bill-Lizzie-Remy) would be a sign of the future, there’s a little news that ought to have a serious effect on it. It has been confirmed that Michelle Ray Smith (Ava Peralta Lewis) will be departing from Guiding Light. This news comes as little surprise considering the actress was set for maternity leave. Which brings us to more news: Miss Smith recently gave birth. The actress and her long term boyfriend Michael Jayden have just welcomed into the world a new baby boy who they have reportedly named Jake. Although the child was initially reported due on July the 21st, actress Cailtlin Van Zandt (Ashlee Wolfe) spilled the news of the birth in a recent interview.

Soaps.com sends our congratulations to the couple on the arrival of their new son and wish them all the best!

Smith’s final air date will be July the 28th. Although the character has become a significant aspect of several key relationships on the series, the part is not expected to be recast. The character came into the world of Springfield in 2005 while on the run from a troubled life. She was quickly taken in by the Cooper family and began an on-again/off-again relationship with “Coop” Cooper. This romance was complicated by the advances of her boss at the time, Alan-Michael Spaulding. The outsider also discovered she wasn’t as removed from Springfield as she initially thought. She discovered that her one time nemesis, Olivia Spencer, is actually her long-lost mother. The two have managed to put their past behind them and develop a caring relationship. Ava also proved to be as ambitious and manipulative as her mother, scheming to get Bill Lewis to marry her by being impregnated at a clinic and passing the child off as his. Although this plan was foiled, it began to fall apart anyway since she was already falling for another man, Remy Boudreau.

Before joining the world of daytime, Smith had established herself as a model, appearing in the Victoria’s Secret catalog as well as in commercials for Noxzema, Oil of Olay, Dannon, Dentyne Ice and Garnier Nutrisse.

GL Actors Take to the Stage:...