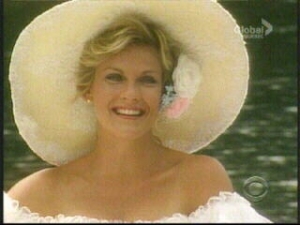 For weeks we’ve been hearing all about the re-enactment of Josh and Reva’s legendary wedding at Cross Creek. Reva continues to wander around twirling her wedding hat, or perhaps it’s merely a clone hat for the actress. Hawk recently confessed that he set this whole movie thing in motion just to get his daughter and Josh back together again. Convoluted it may be, but for a couple with their frequently unbelievable history, it’s actually a bit tame. As this plot line has unfolded, it has brought up all sorts of emotions, not to mention nostalgia, for the characters and for their fans. The event holds a kind of mythical status for the couple and the series. There was even a special video of the whole thing released for the fans years ago.

With all of the hype about the wedding, it seemed like a good time to look back and, of course, to remember that there wasn’t just one wedding but many. Whether that makes them less romantic or more so, is debatable. They’re both the marrying kind, although they’re also the divorcing kind, having married and divorced each other many times. Reva’s even run out of a wedding or two only to be hit by a car. Not only have they married many times, they’ve also married at Cross Creek a couple of times. Once in an elaborate fantasy wedding and once in a slightly more sombre family affair (although that marriage wasn’t legal). The specter of the wedding seems to have a powerful affect on Josh. After all, it was in the fabled wedding dress that Dolly the clone successfully seduced him after a few failed attempts.

The couple also tried getting married at the country club, although that didn’t work out since they honeymooned in San Cristobal where Reva just happened to be married already. The couple got back together after she temporarily revisited her alternate life with Richard. Years later, when that life later came to Springfield in the form of Jonathan, her marriage to Josh feel apart and they divorced, only to remarry themselves on the lighthouse and quickly divorce again.

Now Reva is with Jeffrey, the impersonator of one of her alternative husbands, but he’s delayed their wedding because he thinks she is still in love with Josh, at least the Josh she remembers and is making a movie about. If that sounds complicated, it is. And fact and fantasy have only been getting more muddled as Josh practically breaks down under the pressure of an incessant nostalgia. Although the former super couple has always had a penchant for revisiting their past, it never came to them in such an explicit form. Will they be able to resist the glamorous allure of their own myth when they watch their wedding be re-enacted? We’ll find out soon.

Catching up with Guiding Light's...