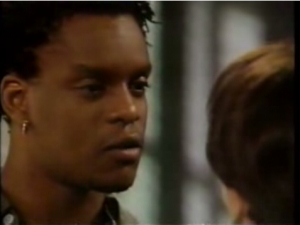 After Tom Pelphrey’s recent repeat win at last month’s Daytime Emmys, I couldn’t help but think back to a previous winner of the same Outstanding Younger Actor Award who once graced the old sound stages of Guiding Light. That young actor, of course, was Kevin Mambo. He played the role of Marcus Williams, the nephew or Gilly Grant and the son of Griffin. In his time on the series, he got mixed up with Dinah’s battles with Roger and the murder of Detective Cutter, romanced sultry singer Dahlia Creed and played his saxophone to the delight of audiences. The actor arrived on the series in August of 1995 and picked up his first Emmy only eight months later. This same feat was repeated the following year thanks to even more steadily impressive work. Mambo left the series in July of 1998, returning briefly to wrap some things up in the fall.

Since leaving Guiding Light, the actor has remained a feature of television casts across various genres. He did a guest appearance on Spin City, was a featured played on Soul Food and did a pilot called Deadline. The actor returned to the world of soaps in 2003 when he took on the role of Dr. Jordan Kingsley on One Life to Live. Between 2003 and 2005 he was a regular on most of the series in the Law & Order franchise. He has also lent his impressive vocal talents to the blockbuster video game Grand Theft Auto: San Andreas.

A native of Havane, Zimbabwe, he was raised in the decidedly different climate of Saskatoon, Canada. Mambo graduated from the University of Southern California and did successful stints on stage before finding work on sitcoms like Freshman Dorm and Family Matters. His life long passion for music served him well on Guiding Light and is at work once again on his newest project. The multi-talented Mr. Mambo will be appearing in the much-hyped new film Cadillac Records. The film follows the rise and fall of legendary R&B record label Chess Records and features an impressive cast including Adrien Brody, Beyonce Knowles, Mos Def, Gabrielle Union and Emmanuelle Chriqui. Mambo will be playing Jimmy Rogers in the feature which is currently filming and expected to be released next year.