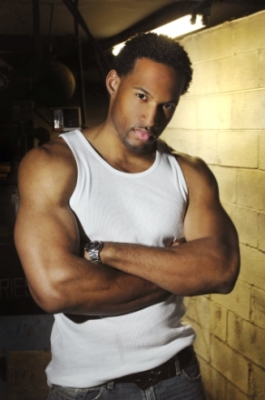 For his fans, it’s been a long time coming, but Guiding Light‘s Lawrence Saint-Victor (Remy Boudreau) has finally been getting the airtime and material to suit his talents. In recent months, the character has been allowed to develop and become embroiled in one of the series most significant summer plots. In addition to displaying some major on-screen chemistry with Michelle Ray Smith (Ava Lewis), the handsome actor has also been able to show off his consistently expanding depth as an actor. The twenty-seven year old Rockland County native joined the cast of Guiding Light in February of 2006 just as he was completing his B.F.A. in acting at SUNY Purchase. Since that time, he has also won awards and critical acclaim for his work in theater and now has a new short film under his belt.

Saint-Victor recently completed work on the film William’s Payne. The short film tells the story of a man struggling to cope with loss and loneliness after being left by the love of his life. He goes on a downward spiral, pushing aside all of his family and friends, abandoning a successful life to be isolated in his pain. The project aims to, “dispel the myth that men do not feel as deeply or suffer the loss of their lover as profoundly as women do.” Lawrence stars as the title character, William Payne, in this sensitive and painful exploration of a man as he collapses. The film was written and directed by Shila Jones for NVTV productions. It is the company’s first feature shot in high definition and is being released exclusively on the web. For more information, and to checkout a preview, please visit the film’s official website.

Soaps.com sends our congratulations to Mr. Saint-Victor on this new work.

Where Are They Now: Guiding Light's...

Catching up with Guiding Light's...