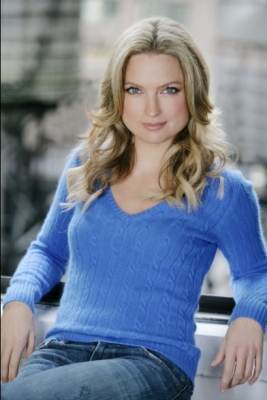 Nicole Forester came to the world of Guiding Light in November 2005. Since then, she’s made her mark in the demanding role of Cassie Layne, displaying a continually surprising degree of versatility and fearlessness. She arrived in the world of soaps after years of working on TV, notably on shows such as Two and a Half Men, Will & Grace and Monk. When not busy at work acting, she is involved with charity organizations around the country and singing in her own acoustic trio, “Telegraph Road”. Soaps.com was lucky enough to have the opportunity to chat with Nicole about her Emmy nomination, the recent changes with the show and her experiences playing the difficult role.

Matt: First, congratulations on your nomination, you must be very excited.

Thank you! Yes, I am super excited! I feel so grateful for this warm acknowledgment by my peers. I know it’s a cliche to say that I’m honored just by the nomination, but I truly am. I feel like I’ve been given a big piece of yummy chocolate cake that I am thoroughly enjoying. If someone wants to throw on a little icing on June 20th, I’m sure I’ll enjoy that, too, but I am so contented and happy to tuck into this cake just as it is! 🙂

Matt: What was it in your work over the past year that garnered you this honor?

Well, we were asked to submit two episodes from all those that aired in 2007, and I chose two episodes around the time of Tammy’s death: One while she was still alive in the hospital and one of the episodes after she died. I’m very touched that the people who voted in this category took the time to watch my episodes and seemed to have liked them enough to nominate me!

Matt: Can you tell us about your experience as an actress dealing with heavy subject matter like Tammy’s death and Cassie’s extreme anguish?

The period of time around the shooting of Tammy’s death and its aftermath was very intense for me. I remember that it kind of usurped my personal life for a few months and that there were two or three weeks right at the heart of it in which all I could do was go to work at 7 AM, cry all day, come home to take a bath, order dinner, and look at my lines for the next day, then go to bed only to do it all over again at 7 the next morning. Saturdays would come and I’d feel like a train had hit me, then Sundays my energy would start to come up again, only to dive right back into the workload for the next 5 day week! It was actually a real pleasure to have such demanding material to sink my teeth into, and I’m grateful to the writers for giving me that opportunity.

Matt: The character has changed a lot in the past year, I was wondering how consciously you chart out the shifts in your performance.

Gosh, I hadn’t thought of it that way. Has Cassie really changed that much? Or have the circumstances around her changed? Since we really don’t get a heads-up on future storylines, there isn’t too much pre-planning I’m able to do. Cassie’s life is revealed to me with almost as little warning as it is revealed to her! So I try to just play the moment as it unfolds, just as we do in real life, not ever knowing what’s up around the bend!

Matt: There has been a lot of heavy stuff for Cassie, but are there other, perhaps lighter, sides of the character you would like to be able to play with more?

Yes, there certainly has been a lot of heavy stuff for Cassie. She’s had some seriously hard knocks to deal with. And I will admit that in the context of all that, it sure is fun when she actually has a good day, when she’s feeling happy or playful or things are going well for a change! It’s a relief for me to play, and I wonder sometimes if it’s a relief for the fans to watch!

Matt: Has the show’s new shooting style impacted on the way you play your scenes; has it allowed greater fluidity or intimacy?

Adjusting to the new shooting style has been a real challenge for me for several reasons but mostly because it means we no longer have any rehearsal at all and rehearsal had always been a part of the process I’ve felt was necessary. But I’m rolling with the punches now, and I’ve actually grown to prefer the days we shoot in New Jersey (perhaps because now that it’s spring it’s like getting a field trip from school, whereas when we started it meant squeezing long johns underneath wardrobe and trying to act while feeling like a frozen popsicle!)

Matt: The Will and Edmund plot took a lot of viewers by surprise, delighting many; what was that storyline like to play? It certainly allowed you to work with two fascinating performers (David Andrew MacDonald and Seamus Davey-Fitzpatrick); any anecdotes?

It was especially fun for me to work with David Andrew MacDonald again because I had worked with him only briefly in my first month or so on the show. Back then I was just so overwhelmed with this new genre of TV that I don’t think I knew how to handle David! But this time around, I had my bearings enough to really appreciate all his subtleties and individual quirks! He’s a joy to work with (except for when he totally creeps me out!).

Matt: If Cassie had a theme song, what would it be?

SUCH a cool question. Any ideas from the fans? Music is super important to me, so I’d love to find just the right theme song – or songs! – for her. The first one that comes to my mind is “Bring on The Rain” by Jo Dee Messina (with harmonies by Tim McGraw). I think it’s something Cassie would hum to herself when she’s trying to keep her chin up despite all the anguish in her life.

Matt: If Cassie was not with Josh, which man on the show she should be hooked up with?

Well, I could certainly see them bringing Cassie and Jeffrey back together… but who knows? Sometimes life surprises you! Maybe she’ll move on to Bill or Mallet, though both Danny Cosgrove and Rob Bogue make me laugh more than most anyone else I know, so I’m not sure I’d be able to suffer Cassie’s hard knocks with either one of them around!

Matt: Can you offer any glimpses into Cassie’s near future?

Sure wish I could, but as I said, they don’t tell us anything! 🙂

Soaps.com sends our thanks to Nicole for the great interview and wish her the best of luck!

‘The Artist’s Wife’ Review: Lena Olin and Bruce Dern Excel in Tom Dolby’s Drama About a Couple Coping With the Husband’s Alzheimer’s