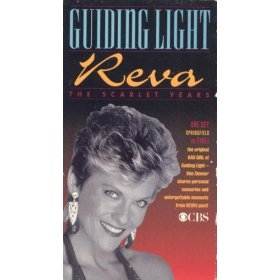 Not so long ago, Reva’s father, Hawk, returned to the canvas and brought a small film production company along with him. After breaking the news to his daughter that her life would be immortalized on celluloid, or perhaps digital video, the subjects of the film have started to wonder what it would be like. Would it be, as Hawk imagined, an old school Hollywood epic with Reva cast as a modern day Scarlett O’Hara? Or would it be more like what Josh imagines, some sort of trashy low budget romp?

With this current plot developing around a movie version of the perpetual love story, some viewers have even started wondering what kind of movie this might actually make. Some even remember that there once was a Reva and Josh movie of sorts. Starting back in the 1990’s, CBS issued a few video versions of popular Guiding Light plots. Reva – The Scarlet Years, released in 1995 covered the most popular Reva stories with clips from the show and feature interviews with Kim Zimmer. 2002 saw the release of A Wedding Story: Josh and Reva, which filed down years worth of footage into a little package. There was even a video featuring the exploits of Roger Thorpe.

Of course, Guiding Light is not all Reva and Josh, it is an entire town full of colorful characters. An even more interesting vision of Springfield came in the form of 1983’s TV movie The Cradle Will Fall. Starring Lauren Hutton and adapted from the novel by Mary Higgins Clark, the film told the story of a woman tracking a mysterious suicide only to discover an increasingly disturbing series of medical experiments. When CBS produced the adaptation, they made an interesting choice when they decided to relocate the story’s events to Springfield, particularly in Cedars hospital. This led to many members of the cast at that time making appearances in character. Reva and Josh didn’t appear, but viewers were treated to seeing the Bauers.

Since their release, these videos have become a treasure for collectors of anything related to the show. While several of them are obscure, anyone interested is sure to be able to track them down online.