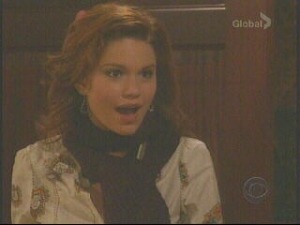 Mandy Bruno (Marina Cooper) will be making her way back to her home town of Portland, Oregon this weekend. The star of recent Broadway productions of Les Miserables and Frankenstein will be traveling back to the Jesuit High School to join her younger sister, Megan, on stage. On Saturday, January the 5th, they’ll be taking part in a special performance to celebrate the 10th anniversary of the Alex L. Parks Performing Arts Center. The 26- year-old actress graduated from the school in 2000 and will be singing Broadway tunes of past and present along with dozens of other graduates in the school’s intimate auditorium. If you’re interested in attending, please call 503-291-5468 or visit the school’s official event site here.

Always willing to take time out to share his talents with the world, Ron Raines (Alan Spaulding) has announced several more performance dates for this month. Mr. Raines will be joining Kathleen Brett on stage to sing Gershwin tunes and other classics of American musical theatre. The two talented performers will be joined by Keith Lockhart and members of the Boston Pops.

The first performances in the series will give audience members an opportunity to get up and dance to their favorite tunes while the New Year’s Eve gala will provide people with an exciting buffet and champagne (of course, you’ll have a chance to dance then as well, and you should). Full details about the performances, as well as a menu for the meals, are available at the official Boston Pops website, here. Tickets are currently available through their website or by calling Symphony Charge at 617-266-1200 or 888-266-1200.

Ron Raines (Alan Spaulding) will be continuing his tour across the United States this month. He’ll be bringing his beautiful voice to the balmy winter climates of Florida between December the 9th and the 12th. This time around he’ll be taking part in the production, An Affair to Remember, a tribute to the music of Lerner and Loewe. Appearing on stage with Ron shall be Teri Dale Hansen and Sal Viviano. They’ll be backed by the Florida Sunshine Pops Orchestra, conducted by Richard Hayman.

For additional information, or to order tickets, please visit the official website here.

If you are in New Jersey this year, you are going to get a special treat for Christmas. Guiding Light‘s beloved David Andrew Macdonald (Edmund Winslow) will be assuming his part in the Shakespeare Theatre of New Jersey’s new production of Charles Dickens’ classic A Christmas Carol. He will join eight other actors on stage while they take on a total of 50 different characters in the course of the night. Macdonald will be transforming himself into a Portly Gentleman, Marley’s Ghost, Dick Wilkins, the Ghost of Christmas Present, a Businessman and a Rich Man, all in the span of a few hours. In addition to this feat, you can hear him show off his shining voice as he and the other performers sing authentic Victorian Christmas carols. This production was adapted by Neil Bartlett and is directed by Bonnie J. Monte.

A Christmas Carol opens now and will continue until December the 31st. You can catch it on Tuesdays at 7:30 PM; Wednesdays to Saturdays at 8 PM; 7 PM on December the 1st; Saturdays and Sundays at 2 PM beginning on December the 2nd, and Sundays at 7 PM. Tickets run from $28 to $52. For additional information and tickets, please call (973) 408-5600 or visit the official site, here. Performances will be held at the F.M. Kirby Shakespeare Theatre, 36 Madison Ave. at Lancaster Road on the Drew University campus in Madison.

* Do you remember Vivian Grant? You may remember her as the charity worker and sometime spy for Spaulding enterprises. Or as the mother of Gilly and David who frequently brought scandals onto the family from 1992 until 1999. She was played by the memorable Petronia Paley through the course of her time on the show. Fans who have missed her since she departed have had the chance to see her on stage, particularly around New York, where she has become an established performer of classical roles from Clytemnestra to Gertrude. She will be back on stage this December starring as the lead in a new play of which she also happens to the author. It’s called On the Way to Timbuktu and it tells the story of a university professor who, after years in a happy inter-racial marriage, finds herself falling for one of her female students. The show promises an impressive evening of theater and also boats the impressive talents of composer Min Xia-Fen and director Talvin Wilks.

The show will run as a limited engagement from December the 6th until the 21st at the Ensemble Studio Theatre located at 549 West 52nd Street (between 10th & 11th Avenues). Performances will run from Tuesday through Saturday evenings at 8:00 PM with matinees on Sundays at 2:00 PM. Tickets are $18 (Students/Seniors $12) and are available through Theatermania.com at 212/352-3101. Please visit the theater’s official site for more information.

The Changing Face of Guiding Light