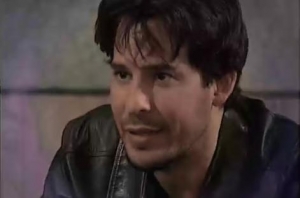 In a message released to his fans, Ricky Paull Goldin (Gus Aitoro) has stated:

I want you to be one of the first to know that I’m planning on leaving “Guiding Light” when my contract expires in a couple of weeks. “Gus” has been a huge part of my life and I will really miss portraying him and bringing this character to life for you. My seven years on Guiding Light have been a wonderful experience. Now it’s time for a new adventure, a new chapter in my life. I will especially miss working with Beth Ehlers, since it doesn’t get any better than “Gus and Harley.”

Thank you! It means so much to me that you have shown your continued love and support for me and the character of “Gus.”

This personal statement comes after several months of speculation which suggested that he would be departing from the show. Executive Producer Ellen Wheeler issued the following statement: “We had really hoped Ricky would stay on as a member of the cast. Unfortunately we were not able to come to terms with his contract. We are sad to see him go and wish him the best.”

Goldin arrived on Guiding Light in march of 2001 playing the shadowy FBI agent Gus Aitoro. At the time, he battled the Santos family only to have enough details of his past revealed to get him pushed out of his job. He stuck around town as a PI and soon became embroiled with the Cooper family. Gradually more skeletons in his closet were revealed and he turned out to be a Spaulding. That didn't stop him from embarking on an intense relationship with Harley Cooper, however. Their love would endear them to many fans and make them one of the show's most popular couples. He earned two Emmy nominations for his impressively naturalistic work in the role which has showcased his charm, impressive comic bravado and intensity.

The forty-year old Goldin began his career on television in 1979, appearing in specials and shows like Kate & Allie, St. Elsewhere, Alf and 21 Jump Street. He also appeared in movies throughout the 90's, including Mirror Mirror, Lambada and Romy and Michele's High School Reunion. Before coming to Guiding Light, Goldin was seen on other soaps such as Another World and The Young and the Restless. He then went on hiatus from TV for a few years to pursue an impressive stage career on Broadway. He appeared to rave reviews in the revival of Grease as well as productions of On Golden Pond and The Pirates of Penzance. He has always been popular with the fans and did his best as an ambassador for the show, often taking an active role in its fan events charity activities.

Soaps.com would like to wish Mr. Goldin all the best on his future endeavors and thank him for all of his excellent work on the show. He will be missed.

GL Actors to Ring in the New Look at...