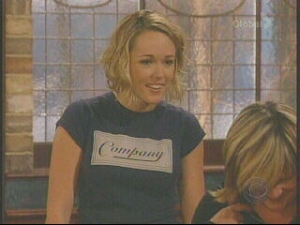 Many viewers noticed a new addition to the waiting staff at Company this week. The little restaurant was graced with the bright and flirtatious presence of a young blond waitress who answers by the name of Gwen. In her brief time on the show, she made a pass at both of it’s bad boys, Jonathan and Bill, and provided some welcome levity to this week’s drama. Quite a few people have asked who the young actress who plays her is and what could be in store for the character.

Our friends at Guiding Light have told me that the part was played by Brianne Moncrief. This is her first sojourn into the world of soaps. She's been glimpsed in a few commercials and she appeared briefly in the final episode of The Sopranos where you may have caught her making out in the background. She graduated from Fordham in 2005 as a performance theatre major and has since appeared widely on the off and off-off Broadway stage as well as in the short film The Beautiful Lie. As for possible developments for her GL character, we've been told that, there are "no plans as of yet to bring her back but you never know!"

GL Actors to Ring in the New Look at...