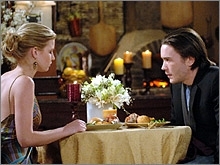 Rumors continue to abound that Tom Pelphrey (Jonathan Randall) and Stephanie Gatschet (Tammy Winslow) are set to leave the cast of Guiding Light. Sources have suggested that Pelphrey will leave by the end of December with Gatschet following in January. Spokespeople for the show however, have not definitively stated whether either departure is, in fact, imminent or whether either role will be recast.

Such rumors have been common this year; both Kim Zimmer (Reva Lewis) and Jordan Clarke (Billy Lewis) were set to leave only to have their contracts re-negotiated. Reports of Pelphrey’s departure have been frequent since the end of last year, but have failed to materialize. In fact, he re-negotiated his contract with the program earlier in the year. Gatschet was given her first contract at about the same time, once her character was moved from recurring status to a lead as Tammy Winslow, the sweet and good natured daughter of Cassie with a fondness for bad boys. Gatschet joined the show in 2002 while still a Bachelor of Fine Arts student at the Tisch School (New York University).

Pelphrey, a New Jersey native who attended the Mason Gross School of the Arts at Rutgers University, joined the cast in 2004. Bringing a freshness and devious charm to the role of Jonathan, the son Reva gave up for adoption who returned to wreak havoc on his family (often by sleeping with its female members) has fascinated and delighted viewers since his arrival. At the most recent Daytime Emmy Awards, he insisted that he was ‘sticking around’ though he offered no specific details on how long his stay would last. ‘I’m not supposed to talk about it,’ he explained. He went on to say that, ‘I truly love the people I work with, so that’s why I want to stay.’

Stay tuned. We’ll work on hard on keeping you informed of the latest developments.