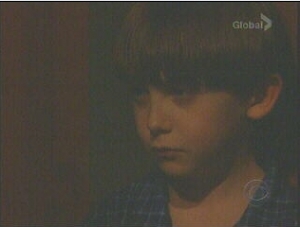 We have come to know him best as Will Winslow, the prodigiously evil ex-prince of San Cristobal and demon child of Springfield, but the actor who plays him already had a history of playing on the dark side. Ten year old actor Seamus Davey-Fitzpatrick established himself as a master of the macabre when he starred as the Anti-Christ in the 2006 remake of horror classic The Omen. Late last fall he finished shooting another horror-thriller that will show off his unusual talents. The short film, which does not officially have a name yet but is rumored to be called “Satan’s Bed”, is currently in post production.

The film is directed by Jonathan Budine, a former editor for Saturday Night Live, Bowling for Columbine and an established music video director. It co-stars fellow horror genre star Joe Zaso and is expected to be released to independent and horror film festivals later this year. To view a brief behind-the-scenes clip of the film, please visit its official site here.

Davey-Fitzpatrick joined the cast of Guiding Light last year, quickly bringing a dimension to the show which it had never really had. The young actor had previously appeared in commercials for The Marriott and Flintstones Vitamins as well as on TV series Sex & the City and The Black Donnellys.

The Voice Semi-Finals Results-Show Recap: The Final 5 Revealed… Though We Kinda Only Needed a Top 2