GL: What ever happened to Frank’s Love life? 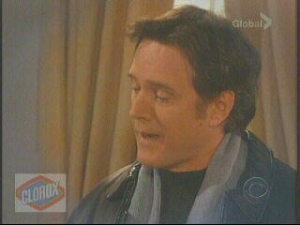 At first, I thought of doing a Valentine’s piece on the Guiding Light love story that might never cease to cast its shadow over the show— Josh and Reva. Then I had a different idea and thought that it would be nice to take a Valentine’s Day look back at the disappointing love life of Frank Achilles Cooper. It’s not that Frank hasn’t gotten around, but that he seems to be bad at getting around. He’s been engaged several times and married. Mind you, he almost lost his wife permanently to Alan-Michael and it was, more or less, an arranged marriage, but still… Frank was a good husband. Maybe too good? He’s been involved with some very lovely women, from Mindy Lewis to Blake to Darci Mathews to Olivia. All women he likely shouldn’t have been involved with, and they knew it. They were too conniving, Frank was too nice. Even when he faked a leg injury to try and win Eleni back, he could barely pull it off. Although he’s a kind and thoughtful man, it doesn’t change the essential tragicomic nature of his character— he’s a cop who can’t get a clue.

Frank is dull, people tell me, which may be true, but he also seems to be a remarkable character. In the soap world, where emotionally volatile men seem to rule the scene and steal the hearts of the ladies, level-headed Frank has been constantly bumbling between women. He’s stood out as an almost symbolic representative of single straight men with no luck and sometimes, no idea of what’s going on inside other people. Frank’s Achilles’ heel seems to be that he’s never been his own man; he’s always been too responsible and played too much of a role to other people, whether it’s as a father, a brother, or a cop. He just isn’t egocentric enough for a relationship in Springfield. So, to the man who once lost his own girlfriend to his father, happy Valentine’s Frank, and better luck to you and the other hapless singles in the world next year!

Frank faking to have a broken leg to win back Eleni: