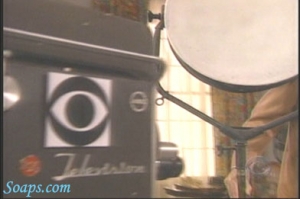 The end of the month is quickly closing in. Soon we’ll arrive at the much hyped date of February 29th. Not just a curious day because it only happens on a leap year, but because it will also be the date that Guiding Light fully dons the brave new look that’s been promised. We’ve already told you about where the show will be shot (here), but since the future is where we’re all going to be spending our time, as a psychic once joked, here’s a little more information about the upcoming change which may be of interest.

Barbara Bloom, the senior Vice President of daytime programs at CBS has officially stated that the “…reality is that daytime shows are still a vitally important part of the network, but you have to look at the issue of audience erosion and take it seriously.” And what is causing, or, at least, contributing to this erosion of the audience? “The way daytime looked was becoming a barrier in terms of bringing in new audiences,” Bloom explained. The senior VP-managing director of Televest Daytime Programs, Brian T. Cahill, has cited research done by the production company which suggests that much of the TV audience has become disaffected with the traditional way of doing things. “Some of these soap opera production conventions were distracting for people, and it’s because we live in an age where prime-time programming is very authentic,” Cahill has stated. According to Neilsen numbers, Guiding Light has lost nearly half of its audience in the past decade and the soaps industry in general has been losing nearly five percent of its advertising cash per year for the past several years.

Some insiders have suggested that the new look for the show may not be as superficial as it sounds but will fundamentally change the way stories themselves are told. Traditionally, soaps have been shot with massive, and sometimes awkward, pedestal cameras which weigh upwards of three hundred pounds. This allowed for, and necessitated, carefully plotted and reserved distant shots. Such a shooting style has a remarkable impact on mood and pacing.

Now that the show is putting these one million dollar monster cameras behind them to grab a multitude of inexpensive handheld cameras, the show's entire feeling will change dramatically, more importantly the pacing of the show will change. We've already seen glimmers of this recently as the show has begun to move more rapidly while the careful framing of the past vanishes for unusual angles and kinetic movements which are meant to be more illustrative of the character's feelings and perspective. This thirst for gritty realism may also mean that we will continue to see the vanishing of what was once the show's strongest trait— it's frequently witty and literate writing, in favor of more colloquial and improvisational sounding dialog.

It's a Boy for GL Alumni Grillo and...

GL: What ever happened to Frank's...