It’s a Boy for GL Alumni Grillo and Moniz 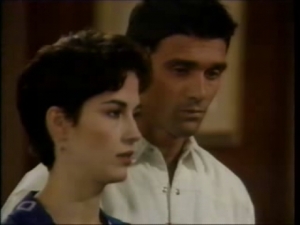 Former Dinah Marler, Wendy Moniz, just became a mother again. She and her husband, Frank Grillo, recently welcomed a new son into the world. Rio Joseph Grillo was born on Friday, January the 25th. This is the second son which the couple have had together (Grillo also has another son from a previous marriage).

The couple came together while shooting Guiding Light where he played Hart Jessup to her Dinah Marler from 1996 until 1999. They were married on October the 28th, 2000, soon after their departure from Springfield. Since leaving the show, he has appeared on more than a dozen other TV shows including The District, The Shield and Battery Park. Lately he’s been featured prominently on Prison Break and The Kill Point. Moniz appeared with him on Battery Park before taking roles on Nash Bridges, The Guardian and Big Shots.

Soaps.com sends their heartfelt congratulations to the couple on the newest addition to their family!

The Writer's Strike and Guiding...