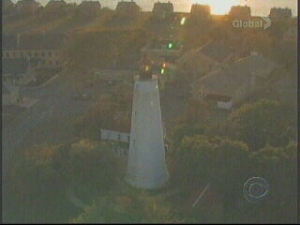 Late last year, the people behind Guiding Light announced that there would be some major changes to the way that the show would look. This would include the type of cameras used and how scenes were shot and edited. Aiming for a more naturalistic feeling, and to appeal to a more youthful audience, the show’s camera work may soon be largely hand held and the editing more rapid. We’ve already seen some instances of this, particularly on Wednesday “In the Light” episodes, like last week’s featuring Harley in New York. While it may take awhile for this aspect of the show’s new approach to gel effectively for viewers, another piece of the puzzle has just fallen into place.

This past week, the producers at Guiding Light were given something else they’ve been searching for — a place to create the Springfield they’ve been dreaming about. Soon, the generally unpopular stage sets that have served as Springfield may be vanishing into the distance. Peapack-Gladstone, a small and idyllically rural borough in New Jersey, will be the place that the much touted, “more realistic” version of the legendary soap town will be filmed. When scouting for locations, the show’s production team reportedly fell completely in love with the town and the surrounding area. On Wednesday, January the 16th, the town council for the area approved TeleVest Daytime Programs Inc.’s request to shoot scenes in the area. Although the local council approved initial plans for filming in December, a few kinks still had to be worked out but the final approval on the deal is now sealed.

Filming is expected to commence as early as the end of the month and is contracted to go on for two years. Three buildings are being leased for use, including the Gladstone Tavern, Peapack Reformed Church and the Komline house, a Dutch Colonial-style home with 32 acres of woods. Local tennis courts and additional facilities in the town of less than 2,500 residents may also be used. During her meeting with the town council, producer Ellen Wheeler reportedly joked that she wished droves of paparazzi and fans would be showing up around filming, but no one seems to think that will be a problem.

The Writer's Strike and Guiding...