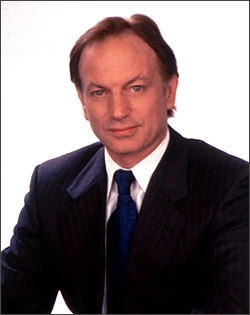 Justin Deas (Buzz Cooper) has had a long history in soaps, appearing on One Life to Live, Ryan’s Hope, As the World Turns and Santa Barbara before making his way to Guiding Light. In that time, he has picked up an armload of awards for his intense performances but he has also found time in his busy schedule to shoot a few films. One of those films is being released on DVD this spring. The Drum Beats Twice tells the story of a Vietnam War hero who is viciously attacked and left without sight, speech or hands. Things look hopeless for him until a young nun tries to guide him back into the world and toward a shocking revelation. In addition to Deas, the film also stars former Marah Shayne, Laura Bell Bundy (lately seen in Hairspray) and several other daytime stars including Eileen Fulton and Susan Misner.

The film was directed by lawyer/actor/writer/producer Kenneth Del Vecchio. This is not the only time Del Vecchio and Deas have collaborated. Beyond The Drum Beats Twice, the pair have also worked together on the horror film Polycarp, released last year. Currently, they are in production on the project iMuders, which follows the tale of a series of grisly murders connected to a Myspace chat room. Deas will play the role of the university president in that film which is expected to be released later this year.

If you are interested in watching a preview of The Drum Beats Twice or purchasing a copy, please visit this link. The film is also available for download at a reasonable fee. You may visit this link to find out how.

GL Counts Down to Jonathan's Return