The Changing Face of Guiding Light 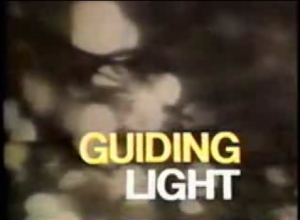 A new year begins and a new look for Guiding Light will soon be upon us. Many of you have no doubt heard of the sweeping changes in style planned for the show in the coming months. This year it will be made over, leaving the strict use of stage sets behind and allowing cameras to wander around and follow actors in real world settings. It’s also been hinted that we can also look forward to more rapid editing and hand-held camera work to give the show a more realistic and modern feel. Only time will tell what these promises of change really mean. Beyond that, we should start looking forward to a new beginning to the show.

When the opening sequence was revamped in 2007, viewers were given a montage of hands and voices joined together to recite the poem that had graced the show in its early radio days. This wasn’t the first time the show’s opening has been revamped though. Every couple of years the show tries a make over. Back in the 50’s, the show opened with an announcement from the sponsors and sunlight bursting through clouds, all set to the strings of Wieniawski’s Violin Concerto # 2 in D Minor. As the 50’s went on, the beams of light were replaced by the more concrete lighthouse and then a spotlight. The spotlight with the show title in Clarendon font was perhaps the longest lasting of opening sequences, spanning into the mid to late sixties and still embracing the show’s religious overtones.

When the show went to color in 1967, the opening had another change. It got a new organist and a new musical theme as well as a new cursive font for the title. More dramatically, there was no light on the screen but rather the face of one of the show’s stars, usually Ed Bauer, frozen in a dramatic expression. These changes were short lived. The lighthouse soon returned to prominence, now appearing in a simply filmed long shot. This would change color from blue at the beginning of the 70’s to orange towards the middle of the decade. The theme music changed again during this time. It became “La Lumière” by the show’s new organist Charles Paul. But as the decade plodded on, all of the soaps were undergoing a major revamping. This would involve significant redesigns and begin to force away the previously omnipresent organ music that served as the pulse for the show. Easy listening came to dominate daytime and GL was no exception. Turning away from the lighthouse, the opening credits now featured flowers bathed in light with the title in Helvetica and the wordless song “Ritournelle” in the background.

This changed in the 80's when the show, somewhat after the fact, adopted a disco influenced style reminiscent of Solid Gold, a style already copped by ABC for its soaps. The wider gilded Helvetica title font was surrounded by strange glimmers of light and flashes of action sequences. There was a rapid change in opening music at the time. Jack Urbont offered a disco variation before a new producer introduced "My Guiding Light" by Rob Mounsey as the theme, both in orchestral and synthesizer versions. Most of the decade was spent in variations of the disco theme that started it all, with the title changing color from time to time. As the 80's wore on, the opening became more dominated by montages of the actors until the 90's arrived and re-introduced the lighthouse. As the lighthouse cast its beam, images of the actors were marched across the screen. Early in the decade, Mounsey wrote a new theme called "Hold On To Love" which went through instrumental variation every year. Near the end of the decade, the opening sequence became very short and simply featured the lighthouse.

In 2002, Brian D. Siewart composed a new opening theme and the show got a crisp new logo featuring the title in bold. Images of the characters, usually paired in couples, seemed to rotate around the screen while held in tiny prisms. The following year they changed to a theme by Rick Rhodes and Danny Pelfrey called “True Light” and brought cast montages back and bits of the recent episodes. The title slowly crawled across the sequence in large letters. In 2005 the sequence changed again. Now it featured a rapid montage of action, comedy and romance shots with superimposed close ups of the actors faces while the title, given in initials as "GL", spun shimmered as the lighthouse shot its beam through it. The most recent opening to the show tried to call back to its past, does this mean that a new opening could say something about the future? We'll have to wait and see.

A few Guiding Light openings from over the years.