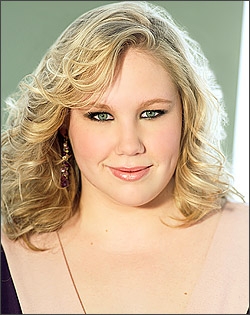 Recently, Guiding Light‘s Caitlin Van Zandt generously took some time from her schedule to answer questions submitted to us by visitors to our message boards. A native of New York, Caitlin joined the cast of Guiding Light on March 25, 2006, taking on the complex and often surprising role of Ashlee Wolfe. Starting out in theatre at a young age, Van Zandt appeared in episodes of Queens Supreme and Hope & Faith as well as The Sopranos before assuming the role of Springfield’s most enigmatic blond. The troubled Ashlee has, in many respects, broken the mold of what is expected of a female character on daytime television and, in the process, has won the hearts of many viewers. In addition to her TV work, Van Zandt has also appeared in two independent films: Stephanie Dally and Gardener of Eden. The charming young actress currently attends Hunter College where she majors in religion with a minor in psychology.

The Character:
The friendship between Ashlee and Daisy has been put on the back burner lately; how does she feel about that, especially since Daisy could really use a friend right now?

Well, I totally agree that Daisy could really use a friend right now. Unfortunately, we have no say in what we shoot, so the way I justify it is that Ashlee and Daisy are good friends, always there for each other, it’s just all off camera.

One day Ashlee’s scheming with Blake, then she’s lusting after Jonathan, then she’s just a chatter box, then she’s an attempted murderess because someone said bad words about her mother. How do you deal with your character’s inconsistency?

I deal as best I can. Usually the inconsistencies in our characters are due to storylines that then end and we need to bridge the gaps. I try, try being the important word, to have Ashlee evolve, as we all do, as a young person. This has to be done in this heightened reality and it is something we all work on and struggle with.

Who do you think the real Ashlee will turn out to be?

I hope Ashlee turns out to be Phillip… just kidding. I hear such good things about that dude. Everyone loves him…

What direction do you want the writers to take your character?

I would love Ashlee to be more self-assured, less needy. I would like her to be a good role model for all kinds of young women that struggle with confidence issues and social problems.

If Ash could kick the butt of one SP female, who would it be and why? (Doris excluded)

Ah, excellent question… Off the top of my head, I would say Olivia. Firstly, she is the most amazingly intelligent and beautiful woman ever. That having been said, she broke Buzz’s heart and pushes Ava to the dark side. She’s sassy and probably could hold her own against Ashlee… A fair battle.

Will the secrets of the Wolfe family ever come to light? Any hints?

Well, Orlagh and I always laugh about the many possibilities, however, I have no hints to give. At this point, Ashlee was an immaculate conception and the only shame we carry is that we once lived in a trailer.

Ashlee: Glam girl or CO2 waitress?
Um… probably a bit of both. Balance is a good thing.

Is Coop a good kisser? Do you find it awkward doing a love scene on the show? Are there any other guys on the show she'd like to see Ashlee in a relationship with?

John is a very good kisser. It can be awkward, however, we have yet to have 'the sex scene', so I'll let you know after that. John is very much a buddy, like most of the couples on the show, there is hardly any sexual tension. We are a touchy-feely bunch. I would really love to work with Big-Bad-Bogue or Murray, both amazing and terribly cute.

The Actress:
Ashlee is sometimes the show's comic relief, do you enjoy that role?

I really enjoy being the clown. It was particularly important when Zimmer was in the thick of the cancer storyline. It's also much more challenging.

Do you have the same positive personality as Ashlee does?

Well, I try to. I can laugh at myself most of the time. I am certainly not dough-eyed like Ashlee usually is. I also don't shoot people.

What prompted you to go into acting?

Well, I grew up in the theatre. Tap dancing and singing came first, around four years old. It stuck and to this day, I can't find anything I enjoy doing more.

What other kinds of roles would you like to play?

All kinds of roles. Alien demons, homeless mothers, Anna Nicole Smith... Everything and everyone that is at all believable.

When not hard at work for GL or doing charity work, what do you enjoy doing?

I love going to the movies and seeing good theatre in the city with friends. I will spend a boring day in the MET, wandering around alone. I love Central Park. I travel and visit friends whenever I have a free couple of days. I love dinners with cast mates. Oh yes, shopping.

Do you ever read or post on the message boards?

Actually, I do sometimes. 95% of the time, people really enjoy me and my character. That other 5% is horrible. Kim has yelled at me to stay away. It is hard to not hear what you guys think. I did post on a board, this board actually, once. Hardly anyone believed me, so I gave up. I have learned that you just can't please some people. There will always be people who hate me and will feel better about themselves by posting rude comments about my character, my looks, and the storyline. The only comfort is, all of the actors are disliked by one person or another. I have not been the only person to get emotional over it. We use each other as a support network. Thanks for the "Trashlee" nickname, by the way. Very classy.

How was working on The Sopranos different from working on Guiding Light? Is James Gandolfini as sexy in person?

Firstly, Jimmy is sexier in person. He is so disarming and generous... very hot. The pace of the two shows is totally different, along with the budget and the attitudes (of most) of the actors.

Where do they get your amazing clothes from?

A lot of stuff comes from Gap, Macy's, Old Navy, and Torrid. I try not to pay attention.

Our thanks again to Caitlin and the people at Guiding Light for the great interview. We hope that everyone enjoyed reading her answers as much as we did. Everyone here at Soaps.com sends their best wishes to Caitlin and her co-stars for the new year!