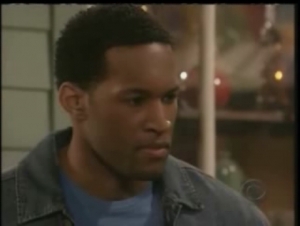 Wondering where Lawrence Saint Victor (Remy Boudreau) has been? Well, recently he appeared at the 26th Annual Vivian Robinson Audelco Recognition Awards to pick up an award. The Guiding Light actor was on hand with the rest of the cast from critically acclaimed off-Broadway production Black Man Rising to receive awards for their hard work this year. The show took home five awards, including the honors for Dramatic Production of the Year, Outstanding Ensemble Performance, Director and Choreographer.

Black Man Rising is a new play by James Chapmyn which deals with the everyday lives of African-American men as they struggle against stereotypes and the shadows of their long and difficult history. It required its performers to be fluent in the full range of theatrical expression, from choreographed movement to choral speaking. It impressed audiences in New York and the outlying area throughout the past summer. In an additional Guiding Light related note, Petronia Paley, who played Vivian Grant from 1992 until 1999, won the Best Supporting Actress Award for her work in Electra.

The awards were given by AUDELCO (Audience Development Committee, Inc), a not-for profit membership organization which celebrates the artistic achievements of the African-American community. They try to reach out to local audiences through their bi-monthly newsletter, Intermission, and a conversation series.

Soaps.com sends our congratulations to the winners and wishes them all the best!

The Secret Career of Doris Wolfe