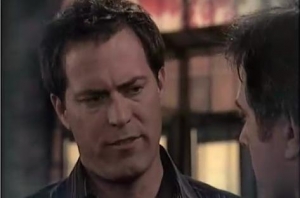 Guiding Light viewers know him best as the well-intentioned cop with a dark past, AC Mallet, but film goers will soon be seeing him as he takes on two different roles for the silver screen. Robert Bogue just completed shooting parts in two films over the past few months, both set to be released early next year. He will be playing Ed Spade in The Dissection of Thanksgiving. The comedy, directed by Rafael Monserrate, stars Jay O. Sanders, Kathleen Quinlan and Marisa Coughlan. It takes place in a Chinese restaurant and examines the unfolding of a family crisis through the eyes of its various neurotic members.

He also recently completed work on the film Jack Frost. Starring Jason Behr and Monet Mazur, the film follows a New York City playboy as he tries to resolve his mixed feelings about the engagement of his childhood sweetheart. Examining the pull of nostalgia and the power of friendship, the film follows Jack and his pack of problematic friends as they struggle out of the past and toward the future. Bogue plays the role of Russell in this film directed by Steve Clark.

Robert Bogue bounced around the south as a child before winding up in a Colorado college where he got a degree in International Political Economics. Rather surprisingly, after school he leaped into acting in New York City where he was one of the original members of famed The New Group Theater Company. He began working regularly in television in 1996, playing roles on Sex and the City, Touched by an Angel, Third Watch and OZ before taking on the role of AC Mallet in 2005. He has also produced, co-wrote and acted in the film Backseat which was released in 2005. Currently, when not in the big city working, he spends his time in Pennsylvania with his wife and two children.