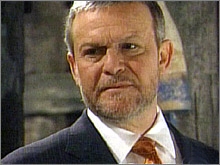 To paraphrase Alfred Hitchcock, a story is only ever as good as its villain is bad. Whether you love them or simply love to hate them, Guiding Light‘s nastiest characters have always made things more exciting. In it’s long history, GL has had some very impressive villains. While many of its heroes and heroines have been morally dubious, most of its villains have been almost unrelentingly evil. It’s always been a remarkably human evil, however, which has rarely dipped into caricature. This is due in no small part to the nuanced acting displayed by many of the show’s finest villains. Their wonderful capacity to pull so many devilish gems from the writers’ words has been one of the greatest animating features on the show for the past thirty years.

This week we’ll look at the notorious career of the show’s longest-lasting baddie, Alan Spaulding. But he did not come to the show alone. The arrival of the Spauldings brought more than just a few characters to add to the list of residents in Springfield. The family signalled a fundamental change in the fabric of the show itself, introducing corruption, corporate intrigue and violence onto the scene in a way which really hadn’t been present before. They brought the whole scary urban world with them, breaking down the wall of a closed, relatively isolated community. From then on, the show would move all over the map, from New York to Venezuela to San Cristobel, and the Spauldings would make enemies everywhere. While most of his family has tried to compete with him for the power of his position, and who can forget those battles with his sister Alexandra or with his own sons, Alan has always managed to come out on top in the end and serve as the show’s dominant catalyst.

The Actors
With the exceptions of a few brief fill-ins, there have been two actors who will really be remembered for taking on the demanding role of Alan Spaulding, the increasingly menacing tycoon who pushed Guiding Light through the 70’s and 80’s until today. Each of them managed to imbue the character with their own peculiar tones. Christopher Bernau, who played the role from 1977-1984 and then from 1986-1988, was already an accomplished stage actor, renowned for playing Dracula and Shakespearean villains. He was also famous for his part on vampire soap Dark Shadows. The other major actor to take on the role has been Ron Raines, who has played the part since 1994. He joined the cast while already an established Broadway star and has often been acclaimed as one of the most successful recasts in the show’s history. While he displays less of the cracked surface found in Bernau, he gives the character more grim charm and pathos. But both men have always captured that strange mixture of the volatile and, dare one say, the fragile that seems so important to the character. However cold and calculating he tends to be, Alan has always been in a precarious position, verging on madness and self-destruction.

In Business: Took Spaulding Enterprises from his father; sabotaged the Lewis Oil-LTA deal; stole information from secret files at Lewis Oil; used the media to expose the Lewis’ involvement in illegal cloning and suggested they murdered Dolly; hired Brent Lawrence to commit accounting fraud for Spaulding Enterprises; stole Lewis Oil away from Josh and Billy Lewis by underhanded means; plotted the destruction of the San Cristobel Harbor Project.

Bribery and Blackmail: Bribed Ramon de Vilar to claim to be Elizabeth's lover; made Emily quit as Alan-Michael Spaulding's nanny when he threatened to expose her past; threatened Neil Blake over his involvement in a baby-swapping scheme; blackmailed Lillian Raines when she hired a man to drive Carl out of town; bribed Brent Lawrence to leave town; bribed a medical technician into making sure he was named on the paternity test for Beth's baby; blackmailed Olivia Spencer Lewis into sleeping with him; blackmailed Lena Kendall (a prisoner) to spy on Harley; bribed Jonathan Randall to leave town; brought Nick Spaulding to the Bahamas where he had him drugged and video taped in a compromising position ; blackmailed Alex to date one of Eden's studs; attempted to bribe the Raines' family to move; blackmailed Alex with video evidence of her stalking of Reva; paid Fran Richkin to testify during Reva's trial; bribed an orderly at County General to aid Annie; bribed court officials to have Beth Raines reprimanded into Bradley's custody; forced Bradley Raines to charge Phillip with harassment.

Abductions: Had Simon Hall drugged and abducted to San Rios; hired Professor Blackburn to kidnap Beth Raines; kidnapped Alex, Blake and Vanessa on a yacht and attempted to force them to sign over their shares to him; kidnapped Alex to coerce her into signing the presidency of Spaulding Enterprises over to him; had Tammy Layne taken from a foster home to frighten Cassie; had Lizzie kidnapped so he could plant a listening device on her.

Set-ups: Had Ross Marler drugged and then planted cocaine in his car; set Ross up with a prostitute; Falsified Beth's death certificate; tried to set up Harley for corporate fraud; hired Edmund to seduce Alex; forced Cassie Layne to work as his spy for him at Lewis Oil and set up Josh Lewis to be found in her bed; switched Olivia's birth control pills with placebos; tried to set Phillip up for the murder of Neil Everest; hired a woman to impersonate Beth to swindle a million dollars from; paid Jerry Dalton to run against Ross in the D.A.'s election; hired Carl Stevens to keep Phillip and Beth apart; snuck into Lizzie's room to get her to shoot him; drugged Harley.

Framing and manipulation of the law: Framed Ross Marler for embezzlement; bugged Vanessa Chamberlain and then attempted to blackmail her; paid Brent Lawrence to manufacture evidence to push Alan-Michael out of the company; had Amanda Spaulding arrested and jailed for prostitution and tax evasion; paid thugs to attack Cassie Layne and then pretended to rescue her; arranged for a city-wide power outage so he could break out of prison.

Why?
Like many Springfield's residents, family is everything to Alan,. Ironically, this tends to mean bad news for everyone, especially his family. There's something melancholy about Alan, as if he views his life like it is a grand tragedy. However cynical he may be, there is always something idealistic about him; that's why he seems so chronically disappointed in everyone else and feels free to manipulate their lives. He has always lived in a big way, much like the characters in his favorite operas, womanzing and mercilessly closing deals while hunting down any perceived threats viciously. As he's gotten older and his health has suffered, he seems to have mellowed quite a bit, often farming his dirty work out, more content to hatch nasty quips than dirty schemes.