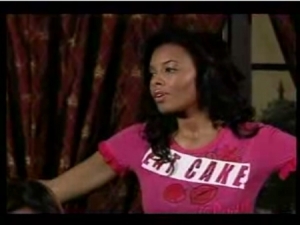 If you want to see more of Lawrence Saint-Victor (Remy) and EJ Bonilla (Rafe), you’ll soon get a chance. Their fans will be able to catch them in their non-Guiding Light moments when they begin to cross over into guest appearances on the new season of MTV‘s reality show Run’s House. Beginning on October the 25th, you’ll have a chance to catch them in their off screen lives as they interact with Vanessa Simmons (Lola) around the set. Run’s House airs every Thursday at 10:00 PM.

The vivacious Miss Simmons first appeared in late August as the 'sweet and innocent' girl that Mel tried to set her troubled brother Remy up with. It quickly became apparent that Lola was far from sweet or innocent and was more interested in riding around on Remy's lap than holding his hand at choir practice. A shocked Remy has been hiding ever since, to the consternation of his confused sister. (No offense to any of the real Lolas out there, but come on Mel! The girl's called Lola! That's like a code word for trouble.)

Run's House follows the family life of Run DMC frontman turned minister Joseph Simmons. It began its cross over with Guiding Light last year when the talented young actress tried to make her break into daytime drama by auditioning for the show. That process was documented last season and is being followed up now as the cameras follow her while she transforms herself into Springfield's newest bad girl, Lola.

When she isn't having her real or fictional lives filmed, the twenty-three year-old Vanessa busies herself with fashion. Together with her sister, Angela, she launched Pastry Footwear this March, designing and promoting their own fun and fabulous footwear for stylish ladies everywhere. To check out some of their designs, please follow this link to their official site.