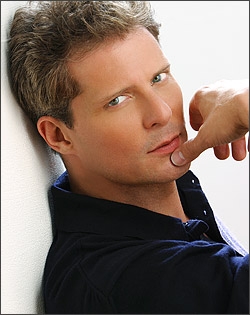 To paraphrase Alfred Hitchcock, a story is only ever as good as its villain is bad. Whether you love them or simply love to hate them, Guiding Light‘s nastiest characters have always made things more exciting. In it’s long history, GL has had some very impressive villains. While many of its heroes and heroines have been morally dubious, most of its villains have been almost unrelentingly evil. It’s always been a remarkably human evil, however, which has rarely dipped into caricature. This is due in no small part to the nuanced acting displayed by many of the show’s finest villains. Their wonderful capacity to pull so many devilish gems from the writers words has been one of the greatest animating features on the show for the past thirty years.

The Actor
Fresh from playing a 221 year old time traveler on Another World, David Andrew MacDonald took on the small part of Prince Edmund in 1999 with no one expecting it to last for very long. It ended up lasting for six years. The role pushed him in many, often extreme directions, but MacDonald has always claimed to be an actor who scoffs when he’s told that a plot is ridiculous and unbelievable. During a CBS interview in 2000, he stated that ‘I will do whatever is required to tell a good story. I joked to Bradley Cole (Richard) once, “You’re laying hands on people and healing the sick, and I’m off in the corner eating babies.” But if they need Edmund to be nastier to tell a story, great.’

The Crimes
* Attempted to murder Reva on many occasions, both as herself and as Princess Catherine Winslow. This often included framing other people for the killing (victims of set ups were Richard and Olivia), but once he just tied her up and left her to drown in a cave.

* Blackmail: He blackmailed Phillip Spaulding using a videotape of him being intimate with Beth while she was married to Jim; blackmailed Cassie’s fertility doctor into telling Richard that he was sterile (the doctor committed suicide afterward); milked Phillip for money with the help of Lorelei Hills (Beth) impersonating Beth; threatened Alan Spaulding for money; blackmailed Alexandra after she drugged her brother.

Why?
Why was Edmond so bad? MacDonald gave his opinion in a 2002 interview: 'His father hated him; there's no reason that he shouldn't have the same opinion of himself.... He goes to great lengths to prove to himself that he's better than (half brother) Richard and worthy of his father's love. I think that the coldness and cruelty of his father, the death of his mother at a young age and all the attention going to Richard are the largest motivation for him to fill that void. As the writers unfold the character we see he's looking for love to fill up that emptiness.'

What makes him so special? Is it the accent, the good looks, the deep seated anguish that always seems to linger behind his eyes? Or is it the truly warped and perverse nature of so many of his crimes? Somehow, the fact that he really was an intelligent, charming and debonair man made it all the more disturbing and confusing. This quality was brought out a great deal more by contrasting him with Richard and playing up the whole fairytale quality that accompanied his early appearances. As he became part of the fabric, however, the romantic villain gave way to a more realistic and disturbing character who, despite earnest attempts to reform himself, couldn't stop himself from being bad.

Edmund returns to the show starting on Wednesday, October the 24th.