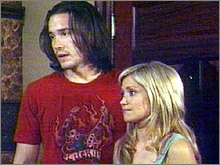 Last year, viewers of Guiding Light had the chance to see troubled Lizzie Spaulding (Marcy Rylan) and the, at least equally troubled, Jonathan Randall (Tom Pelphrey) stumble through a fake marriage while attempting to raise a child. While that seemed doomed from the outset, the admirable onscreen work between the pair of actors seems destined for a repeat. For those who miss the chemistry between Rylan and Pelphrey, don’t despair: You’ll have a chance to see the two talented young actors interact once again. This time they’ll be sharing a stage at the Fat Lady Café in Kauneonga Lake, NY. The actors will be giving a reading of the Paul Austin comedy Ecuador on Thursday, October the 25th, 2007 at 6:30 PM. If you’re interested in tickets or additional information, please call (845) 292-3788.

Both actors have been busy appearing on stages around New York recently. After leaving the cats of GL earlier this year, Pelphrey did some television and film work before appearing infront of receptive audiences in the new play A New Television Arrives, Finally from September the 6th until the 30th (see our article here). Meanwhile, Rylan spent part of September appearing in the comedy Boy’s Life, displaying her ever-expanding performance range. If you can’t wait until the 25th to get your fix of Marcy in person, you can catch her when she appears to sign autographs on Saturday, October the 13th between 1 and 5 PM at the Macy’s located at 2900 E. College Ave in State College, Pennsylvania. The appearance will be part of Macy’s ‘Shop for a Cause’ campaign.