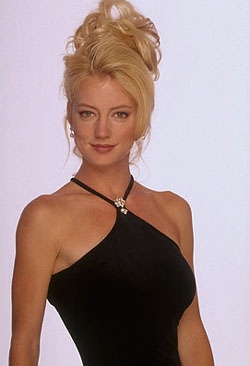 To paraphrase Alfred Hitchcock, a story is only ever as good as its villain is bad. Whether you love them or simply love to hate them, Guiding Light‘s nastiest characters have always made things more exciting. In it’s long history, GL has had some very impressive villains. While many of its heroes and heroines have been morally dubious, most of its villains have followed a line from the gray area to the almost unrelentingly evil. It’s always been a remarkably human evil that crept over them, however, and one which has rarely dipped into caricature. This is due in no small part to the nuanced acting displayed by many of the show’s finest villains. Their wonderful capacity to pull so many devilish gems from the writers’ words has been one of the greatest animating features on the show for the past thirty years.

The Actress
Cynthia Watros played the part of Annie for the majority of the character’s tenure on the show (it was briefly taken over by Signy Coleman after she left). During that time, she won a Daytime Emmy award in the category of lead actress for 1998. After leaving the show that year, she briefly appeared on fellow soap Another World before departing for a successful career in primetime. She could be seen recently on the series Lost and recently shot a pilot for the new Marisa Tomei sitcom, The Rich Inner Life of Penelope Cloud

Brief Bio
From 1994 until 1998, Annie managed to create more chaos and marry more men than even Reva could in her prime. After starting off as something of a goodie-two shoes, the mask began to fall away when she was forced to do battle with Reva over the several men who they shared in common. As a nurse, she got involved with an injured Josh but, before they could be married, her past, as an alcoholic and the wife of pill popping doctor Rick Bauer, came to light. Josh left her but couldn’t stay away. Unfortunately, on the way to the altar, Reva came back from the land of the dead to fight for custody of her children. The battle between Annie and Reva was even more personal because Marah had grown closer to Annie than she’d ever been to her mother. The fights between the two women would become legendary over the next two years. After Annie married Josh, she started drinking again until Rick and Josh finally intervened. But a sober Annie was just as dangerous to everyone. She became Alan’s physical therapist and, in a bid to keep Josh in line, sought out desperate means to become pregnant, including slashing her diaphragm and being artificially inseminated numerous times. After miscarrying the baby, she kept the dead fetus inside her just long enough to get in a fight with Reva. After provoking Reva to throw her down a staircase, she framed her rival for the miscarriage. Her deceptions were soon discovered though. Josh promptly ran back to Reva. Annie was left barren, under probation and with the threat of incarceration in a mental hospital over her head.

Increasingly unbalanced, Annie moved in with her frequent co-conspirator Alan Spaulding. Together they tried to take over Lewis Oil and to sabotage the relationship between Reva and her newfound sister Cassie Layne. Parole violations forced Annie into the mental hospital, but not for long. Alan got her out when he wanted to marry her. Unfortunately for them, Reva and her friends went after her, discovering her shady past before she came to Springfield and the fact that she was still married. This ruined things with Alan and she was arrested again. Annie was always good at getting out though and, after seducing her guard to get out, she got money from Ben Warren for some blackmail info on Ross and Blake and then vanished. She soon returned to kidnap Reva. After leaving Reva on a plane to crash, she jumped without a parachute. Reva survived, Annie was presumed dead.

Annie returned later, with a brand new face. Thanks to plastic surgery, she had her face remodeled after a woman named Teri DeMarco and returned to Springfield as a police detective. She began drugging Josh to break him away from Reva, seduced Alan and began seducing Frank. Reva and Josh tracked down the real Teri DeMarco and exposed Annie who was promptly put in jail. She easily escaped and went on the run. When she discovered Springfield's kidnapped children, she gave herself up to let them go free. While she tried to drug Josh again, she also kidnapped Lizzie Spaulding, alienating her from Alan. With no friends left in town, she went on the run again.

The Crimes
Being a nurse, Annie seemed to have a soft spot for medically related crimes, often involving substantial amounts of narcotics. Like most Guiding Light villains, she also seems to enjoy kidnapping, blackmail and taking the occasional break in Ravewood, the local mental hospital.

* While a thief and drug addict, she killed a man while driving under the influence before faking her own death; stole drugs and altered prescriptions while working as a nurse at Cedars; deleted computer files concerning Kevin Marler's paternity (under Blake's instructions); drugged Josh and tried to brainwash him; switched Josh's blood tests.

* Tampered with her diaphragm while attempting to get pregnant by an unsuspecting Josh (then tried to frame Shayne for tampering with her birth control); lied to nurse Fran Richkin so that she could get artificially inseminated and then blackmailed her (she did this twice); changed Harley's medication to make her psychotic.

* Blackmailed Blake into spying on her husband Ross and stealing his files; blackmailed Ben Warren.

Why?
Like everyone else in Springfield, Annie usually claims to do everything out of love or for the sake of family. Unfortunately for Annie, she never really had a family, but she certainly wanted one. One of the things which was so wonderful about Cynthia Watros' performance was that she could project a remarkable fragility but, like glass, as soon as she broke, she became jagged and dangerous. Set as the most successful rival and enemy that Reva ever encountered, Annie managed to be everything that she wasn't: Seductive, yet sophisticated; obsessive, but deliberate. She also managed to gain the love and respect, not only of Josh, but of Reva's children (for awhile), successfully acting as their mother. Reva hated her and Reva's audience despised her. In that time when Guiding Light had it's share of disturbed women kidnapping children and deeply flawed women seeking their often contradictory dreams, Annie stood out and set her own standards for madness and excitement.